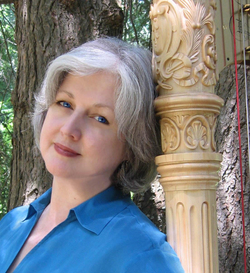 Harpist Emily Mitchell will present a joint recital with her SFA university and music preparatory students at 7:30 p.m. Wednesday, Dec. 7, in the Music Recital Hall, Room 160 of the Wright Music Building.

Hannah Arnold, Sarah Hall and Naomi Harris, who have been studying with Mitchell through the School of Music's Music Preparatory Division, will perform an ensemble with SFA harp students Victoria Oakes, Garland junior; and Martha de Luna Mateo, graduate student from the Dominican Republic. Each of the five students will also present a solo piece. Mitchell will also perform several solos.

Called "a marvelous harpist" by The New York Times, Mitchell has been heard worldwide as a concerto soloist, recitalist and chamber musician, performing in venues such as Carnegie Hall and before First Lady Rosalynn Carter at The White House and before British Royalty in England and at the British Embassy in Washington, D.C.

Mitchell is also an established name in the television, motion picture and recording studios of New York City. She has worked closely with stars such as Michael Jackson, Barbra Streisand, Ray Charles, Barry Manilow and Bette Midler and can be heard playing on 70 film scores.

Her most recent recordings are "Impromptu" and "Mozart Variations" on the JMR label.

She is a graduate of the Eastman School of Music, and the Royal College of Music in London named her an "Associate," as an alumna who has made a significant contribution to the music profession.

Admission to the recital is free. The Wright Music Building is located at 2210 Alumni Drive.