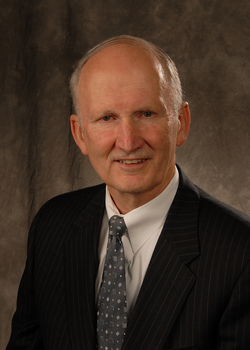 NACOGDOCHES, Texas - James I. Perkins, president and chairman of the board of Citizens 1st Bank, former Regent and longtime supporter of Stephen F. Austin State University, will offer the commencement address during spring graduation ceremonies Saturday, May 14.

Perkins, a Tyler resident, is a native of Rusk, an SFA alumnus and received a Bachelor of Business Administration degree and Juris Doctorate from the University of Texas at Austin. He served on the SFA Board of Regents from 1969 to 1981 and is a former chairman. He is one of the founders and a former chairman of the SFASU Foundation. In 2007, the education college, the largest of SFA's six colleges, was named the James I. Perkins College of Education in his honor.

Also an active attorney, Perkins is a former Rusk city attorney and Cherokee County attorney, an Eagle Scout and Navy veteran. He has been appointed by three Texas governors to serve on state boards, and has served as adviser to the Texas Comptroller and the State Banking Commissioner. Under his leadership, Citizens 1st Bank has been named "The Safest Bank in Texas," "The Most Profitable Bank in Texas," and "The Texas Family Business of the Year." Perkins has been named the "Citizen of the Year" in Rusk. He and his wife, Margaret Hoover Perkins, a bank director and teacher, were named "Citizens of the Year" in Tyler.

More than 75 scholarships are awarded annually by the Perkins family and Citizens 1st Bank, with 40 designated for SFA. The Perkins family also has endowed one professorship and three five-year research grants at the university.

The Perkins have two children, Laura Perkins Fonville and James I. Perkins Jr., both attorneys and directors of Citizens 1st Bank. James is a graduate of SFA and a member of the SFASU Foundation board. Laura, a Dallas attorney, is married to Jerry Fonville, an SFA alumnus and law-enforcement officer.