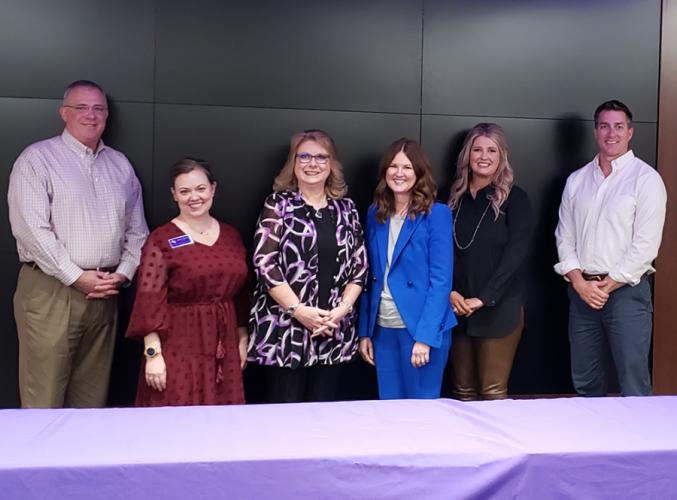 Aubrie Smith, senior entrepreneurship major from Colleyville and president of SFA’s student-led Society for Entrepreneurial Advancement, was one of the students who attended the discussion.

“I've been focusing a lot lately on my why and channeling my decisions based upon what motivates me,” Smith said. “Hearing that the three speakers had such different journeys to find their whys was extremely encouraging for me.”

After earning her Bachelor of Business Administration in finance in 1985 from SFA, Buchanan entered the male-dominated financial planning world as an assistant to two male brokers at Edward Jones. In her five years there, she learned everything she could. Then she took the General Securities Representative Qualification Examination, or Series 7 exam, and opened her own office.

“I wanted to prove to them that I could be as successful as they were,” Buchanan said.

Edward Jones required her to train with another broker, “but nobody in East Texas would train me because I was a woman, so I found a lady in Cleburne who would train me,” she said. “I paid my own way to stay in a hotel for six weeks and learned all I could from her.”

Her business averaged one new account every day for a year. Her male peers all referred to her as “their little broker girl,” Buchanan said. But after four years building her business, she was ranked in the top 3% in the nation for the firm.

Buchanan advised students looking to start their own businesses to treat people fairly, and also to develop a plan and stick to it.

“There’s nothing that you can’t do,” she said.

Atkinson was pursuing a dancing career on Broadway and working for a New York City public relations firm when she first discovered her entrepreneurial spirit.

Atkinson returned to Lufkin with the production knowledge she learned from both her dancing and public relations stints in New York City and put them into practice for Atkinson Candy Company. Now, she manages its day-to-day business.

“Don’t throw away any experiences, hobbies or passions,” Atkinson said. “You never know what will be useful.”

Atkinson told attendees that the work-life balance doesn’t exist and encouraged them to instead focus on one priority at a time. And to those planning to start their own businesses, she said, “Communicate expectations clearly.”

Atkinson added, “The hardest part is you’re the leader of the business. You have to come up with the answers and make the decisions. But seeing those decisions work out well or not work out well and learning from them is very rewarding.”

Mehaffey’s great-grandfather believed that by helping others achieve their dreams, he could achieve his, as well. Mehaffey’s dad passed this advice on to her.
She’s followed his guidance in her career, from working as a state 4-H specialist for the Texas A&M AgriLife Extension Service to serving as interim city planner and communications director for the City of Nacogdoches to teaching future managers and marketers at SFA.

Along the way, she developed relationships with community members who needed her help with social media, design, photography and website development.

“Businesses look to me to try new things,” Mehaffey said.

After establishing two companies to encompass this work, she gained 20 clients in two years.

“Relationships are a big deal,” Mehaffey advised students in the audience. “The way that we communicate with people is key.”

In addition to clients, Mehaffey tries to help her employees, who all began working remotely before it was a common practice. In many cases, they had to leave in-person jobs because they had children. Mehaffey’s remote, hands-off approach allows them to work and take care of their children.

“My favorite part of being an entrepreneur is the human aspect of it,” Mehaffey said. “I get to help people — both clients and employees.”