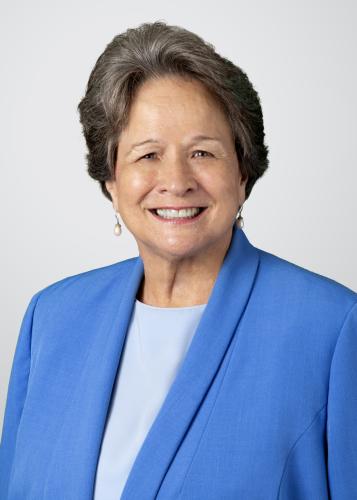 
NACOGDOCHES, Texas — Emily Parker, a prominent tax attorney and Stephen F. Austin State University alumna, will deliver the commencement address during all three of the university’s graduation ceremonies Dec. 9 and 10.

With the exception of a short stint as acting chief counsel and deputy chief counsel for the IRS from 2002 to 2004, Parker spent her entire career at super firm Thompson & Knight LLP, now Holland & Knight. She was the first female lawyer hired by the firm and later became the firm’s first female partner. She served as managing partner at the firm from 2012 to 2016 and retired in 2019.

A native of Henderson, Parker graduated from SFA with a bachelor's degree in economics and finance in 1970. She then attended Southern Methodist University's Dedman School of Law, graduating with a Juris Doctor from that institution in 1973.

Throughout her career, Parker was part of the Who’s Who of Texas attorneys, with the superlatives of best, outstanding, top-notch and distinguished oftentimes attached to her name. Currently a member of SMU law school’s executive committee, Parker’s past legal admissions when she was a star tax litigator in the oil and gas industry went all the way up to the U.S. Supreme Court.

All of SFA’s December commencements will be held in Johnson Coliseum. Candidates from the James I. Perkins College of Education will participate at 6 p.m. Friday, Dec. 9.

At 9 a.m. Saturday, Dec. 10, candidates from the Micky Elliott College of Fine Arts, Arthur Temple College of Forestry and Agriculture, and College of Liberal and Applied Arts will participate in commencement.

Also, at 12:30 p.m. Dec. 10, candidates from the Rusche College of Business and College of Sciences and Mathematics will participate.

Each graduate receives 10 guest tickets with the option to request more. Community tickets will also be available the day of the ceremony. Doors will open one hour before the ceremony begins.