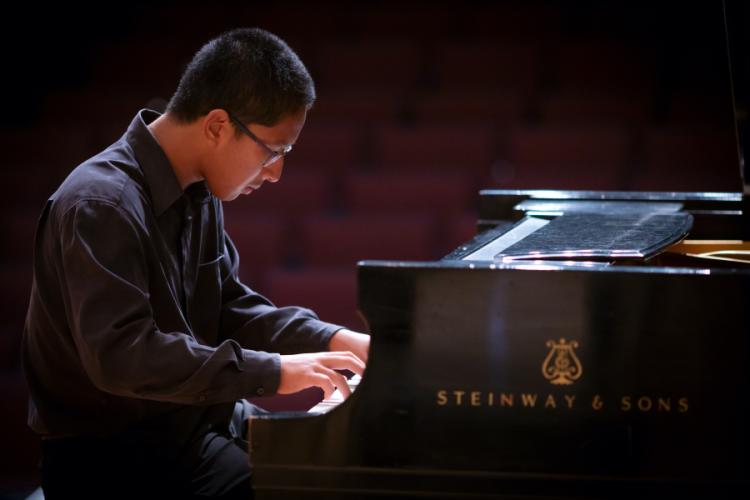 Antonio “Nio” Ajero, a 2022 graduate of Nacogdoches High School who ranked third in his class, will pursue piano education this fall at Oberlin College and Conservatory in Ohio with 2001 Van Cliburn Competition Gold Medalist Stanislav Ioudenitch. 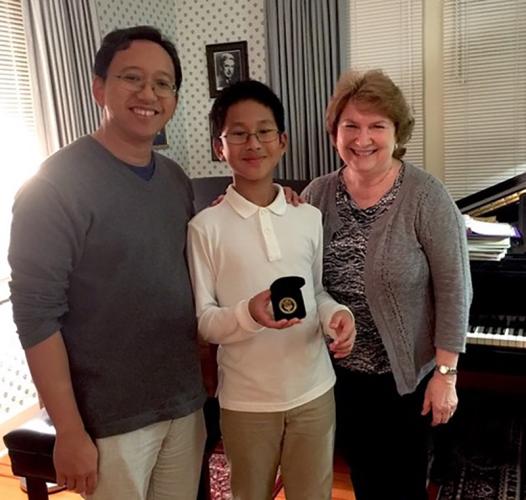 Nio Ajero credits much of his growth as a musician to his piano study with Linda Parr, right, an instructor in the Music Preparatory Division of the Stephen F. Austin State University School of Music. 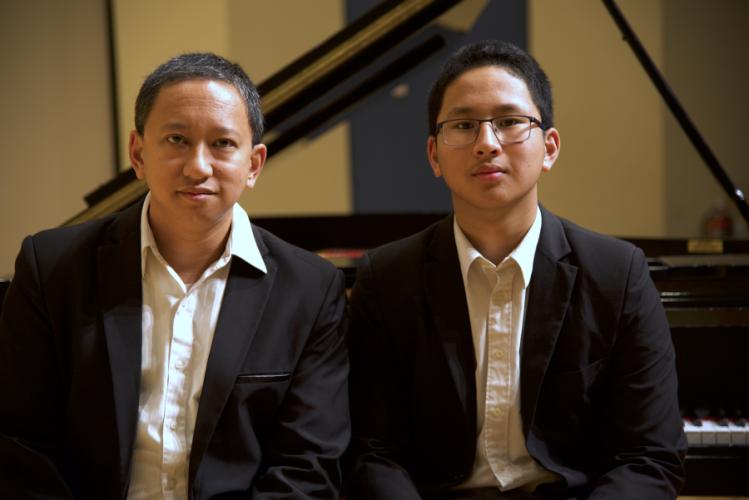 Nio Ajero began studying piano at the age of 3, with his father, Dr. Mario Ajero, piano professor at SFA, as his first teacher.


NACOGDOCHES, Texas – Antonio “Nio” Ajero is known throughout wide-reaching piano circles as an exceptional pianist and musician – having won multiple awards at state, national and international music festivals or competitions; having received acceptance and scholarship offers from renowned music schools and conservatories; and having been awarded performances with noted symphony orchestras in Texas and at the Brevard Music Festival in North Carolina – all of which he achieved before high school graduation.

After recently graduating third in his Nacogdoches High School Class of 2022, Nio is now eager to begin undergraduate piano studies this fall at Oberlin College and Conservatory in Ohio with 2001 Van Cliburn Competition Gold Medalist Stanislav Ioudenitch. After that, he plans to apply for graduate and doctoral programs and to eventually “play” it forward by helping other young pianists reach their potential and realize their dreams.

“While studying in these programs, I hope to continue performing as well as start teaching piano to help pass the love of music to younger generations of musicians,” he said.

As early as 3, Nio expressed a curiosity about the sounds the piano made while listening to his father practice. From the time he was born, Nio heard his dad, Dr. Mario Ajero, piano professor at Stephen F. Austin State University, giving lessons at home.

“We would always have some type of music playing in our car, especially on long drives across Texas and beyond,” said Dr. Ajero. “It would include Classical music but also contemporary and popular music, too. When I formally started him on piano around age 3, it was focused mainly on creating positive music experiences and not necessarily any lofty achievement goals. We would gather at the piano every day just so we instilled the importance of the family activity.”

Nio enjoyed performing and began giving annual solo piano recitals at age 6, first at the SFA Music Prep House, then later in the concert halls of the SFA Wright Music Building.  “That must have been significant in giving him the self-assurance to perform on stage with confidence,” Ajero said. “Of course there’s only so much one can learn from one teacher. So several years ago, I asked Linda Parr if she would take Nio as a piano student, and she accepted enthusiastically. We have to give credit to the devotion that Linda gave to Nio – like she does with all her students – and the elevation of his musicianship after joining Linda’s piano studio was quite clear.”

Parr, piano instructor in the Music Preparatory Division of the SFA School of Music, describes her star student as “eager, attentive and respectful” from the very beginning. “As a student pianist and musician, he showed musical and technical maturity beyond his years,” she said. “As a person, I would say he’s developed confidence and social skills with every experience that I’ve witnessed, and he worked hard for every one of those opportunities. Nio thinks and speaks highly and respectfully of everyone. He has been taught these values from his parents who have dedicated themselves to giving Nio and his sister Olivia (also studying with Parr) a well-balanced environment of family, fun, travel, discipline, exercise, study and practice.”

Olivia, who is four years younger, has seen the joy music has brought to her family. “I think that definitely inspired her to follow a similar path as her brother,” Ajero said. “Early in her music studies, I got Nio involved by playing duets with her, which strengthened both their musical and family relationship with one another. Nio enjoyed that role as the supportive older brother, and Olivia enjoyed playing grander-sounding music with her sibling. They continue to support each other in performances and competition.”

In 2015, Ajero approached Parr about teaching Nio following the final round and awards ceremony of the SFA East Texas Piano Solo Festival in which several of Parr’s students earned top prizes.

“He’d been watching and listening to my students over the years,” she said. “I was totally taken aback when he asked if I’d be willing to work with preparing Nio for his piano performance portion of the Royal Conservatory Music program. I had only a few weeks to help get him ready.  He was 10 years old and turned 11 about two months later. After that, I was privileged to be piano teacher to Nio for seven years.”

Sometimes, with gifted individuals, the teacher can learn from the student. “What I learned from Nio, is that there are unusual gifts that can surpass what I have previously experienced,” Parr said. “Nio had perfect pitch and memorized his music quickly – as with many gifted children – but even at age 10, unusually complex rhythms, extremely difficult technical challenges and even mature musical concepts were taken on without hesitation. I remember working on the tango variation of Muczynski’s ‘Desperate Measures’ trying to explain the ballroom drama with graceful and yet abrupt rhythmic twists,” she said. “He was so young but picked up the idea and went with it. Subtleties in music can be felt in children. For a teacher, there is always an element of cautious planning of the proper repertoire and technical training for a promising student, without skipping to the most difficult and mature pieces. But Nio could learn an enormous amount of music and thrive on it.”

Other benefits of music training

The discipline Nio learned as a piano student spilled into his academic endeavors. In high school, he placed in regional, district and state Number Sense, math, and calculator UIL academic competitions; he was a member of the NHS varsity tennis team; and he won academic scholarships from Nacogdoches Rotary Club, Hispanic Heritage Foundation, NHS Alumni Association, Nacogdoches Symphony Club and Concerned Black Men of Nacogdoches. He is also a second-degree taekwondo black belt.

Additionally, through music, Nio has given back to his community, helping to raise money for charitable causes with his solo recital performances, as well as playing for church services, UIL solo/ensemble and SFA choirs.

In addition to being offered a scholarship and grant to study at Oberlin College & Conservatory, Nio was offered admission and scholarships to The Juilliard School, Eastman School of Music, Manhattan School of Music, New England Conservatory, The Peabody Institute at Johns Hopkins University and The New School College of Performing Arts, New York.

Nio serves as an example of how utilizing the opportunities offered by the Music Preparatory Division at SFA and its dedicated teachers can lead to an aspiring musician’s greater success, according to Alba Madrid, director of the program.

“Music Prep provides a unique opportunity for all the students to study with highly qualified teachers, perform in state-of-the-art concert halls, share their talent with the community, and be part of an inclusive support system needed to achieve success,” Madrid said. “All the experiences that are offered through the music prep program are filled with lessons that will last a lifetime. Through music, students learn the values needed to succeed in life – determination, perseverance, critical thinking, teamwork, attention to detail, courage and more. Music Prep offers a support system of teachers, peers and family that helps each student to grow into a confident and high-achieving individual. Through private lessons, group classes, ensembles, competitions, performances and music festivals, the students have many opportunities to fine-tune their craft while developing valuable skills and traits.”

“Parents play such an important role in instilling values into their children,” Ajero said. “If parents prioritize music education as an essential part of their children’s development and also an essential part of life in general, then children will make it their priority. There are so many benefits to music study – especially piano – beyond just making beautiful music. Those include life lessons, discipline, academic success, and improved mental and emotional health.”

Finding a teacher that will provide the best opportunities for positive music-making experiences is also key, Ajero said. “What’s great is that we have a wonderful team of teachers that can do just that, here at the SFA Music Preparatory Division,” he said.

Nio has his own advice, not only for aspiring young musicians, but also for others who have a passion that they hope may one day become a dream career. “Not only put in hard work and dedication into what you are doing, but also enjoy what you are doing,” he said. “These disciplines combined with the passion for pursuing a certain field of study can make magical things happen.”

Registration is underway for fall classes in the SFA Music Preparatory Division. The Music Prep House is located at 3028 Raguet St. Office hours are 1 to 5 p.m. Monday through Friday. Madrid can also be reached via email at madrida@sfasu.edu or musicprep@sfasu.edu. Parents can find program information on Facebook and Instagram.