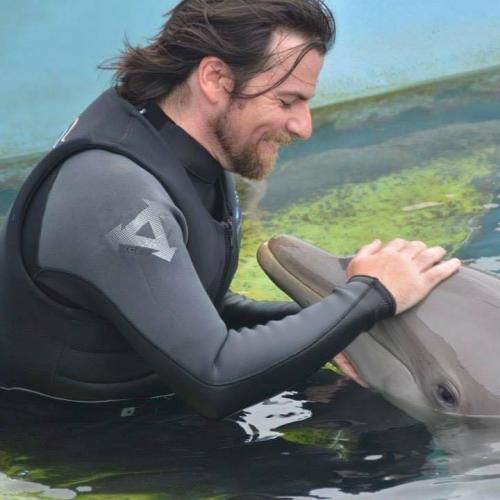 Dr. Jason Bruck, Stephen F. Austin State University assistant professor of biology, recently published a study that sheds light on how dolphins use taste and signature whistles to identify each other. Bruck conducted much of his research at Dolphin Quest in Bermuda, where he is currently spending part of the summer building upon his study.


NACOGDOCHES, Texas — A new study led by Dr. Jason Bruck, Stephen F. Austin State University assistant professor of biology, is shedding light on how dolphins use taste and signature whistles to identify each other.

Bruck’s father is a veterinarian, and his mother was a wildlife rehabilitator in upstate New York. Since Bruck grew up around animals, it made sense that he wanted his career to focus on animals, too. By the time he was 3, Bruck knew, “I was going to be a whale or dolphin doctor. Over time, I realized I was more interested in the science of what and how animals do what they do, rather than just the straight medical aspects of whale biology.”

Trips to SeaWorld and watching fiction shows like “SeaQuest DSV” in the early 1990s led Bruck to pursue a career as a dolphin behavioral biologist focusing on dolphin communication and cognition.

Bruck graduated with his doctoral degree in behavioral biology from the University of Chicago in 2013. He has received numerous grants, authored and coauthored dozens of publications, and served as a faculty advisor/mentee to several graduate and undergraduate students. He formerly served as a visiting assistant professor of zoology and teaching assistant professor of integrative biology at Oklahoma State University and as a former Marie Curie Research Fellow at the University of St. Andrews in Scotland, United Kingdom.

His recent research involving dolphins began in 2016 through a grant from the Marie Sklodowska-Curie Fellowship of the European Commission. Bruck has conducted much of this research at Dolphin Quest in Bermuda, Oahu and Hawaii. These facilities offer their guests the opportunity to view, meet and experience dolphins in sheltered, natural ocean lagoon settings while supporting vital marine mammal conservation, education and scientific study.

Bruck conducts his research above water using specialized equipment, such as underwater speakers and hydrophones. And although the research has provided scientists with important information about how dolphins identify each other and communicate, it also has implications for humans.

“It is likely that dolphins use a lipid taste receptor to identify urine cues in their fellow dolphins,” Bruck said. “The gene that codes for that is called CD36. Most humans also have this gene, and it helps them determine when they have had enough to eat. Humans lacking it are at higher risk for obesity. It is possible that dolphins can offer a better way to study the molecular anatomy of CD36 to help better understand how it works in people.”

Bruck’s research regarding signature whistles piggybacks off discoveries made in the 1960s in Florida in which dolphins were shown to make different sounds when they were separated from members of their group.

“Dolphins don’t have ‘voices’ because the pitch of their calls change as they dive deeper,” Bruck said. “Past research shows that dolphins can use each other’s whistles to address individuals. My previous research has revealed that dolphins can remember these whistles for 20 or more years, and now we know they probably use them the way humans use names for recognition.”

Bruck said this portion of his research is complete, but he is back in Bermuda for part of the summer to build upon it.

“We are moving forward with signature whistle playback experiments to determine how different social relationships may be perceived in dolphin community ecology,” Bruck explained. “Something else we might investigate down the road is how commercial and industrial chemicals might affect urine cuing in dolphins. We may find that oil spills, chemical runoff and other human effects can impede the dolphins’ natural ability to chemically signal to one another. This might prevent males from identifying reproductively capable females or diminish dolphins’ abilities to recognize individuals through honest signals.”