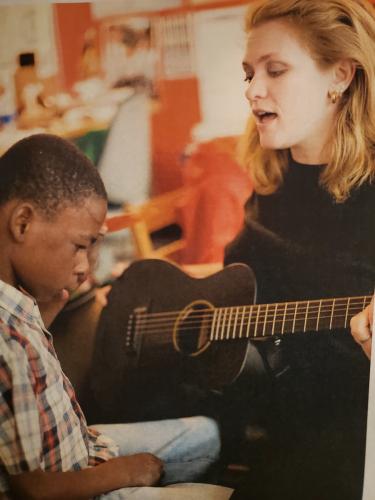 Dr. Shannon Darst, assistant professor of education studies in Stephen F. Austin State University’s James I. Perkins College of Education, and two colleagues recently received the Corinne Kirchner Research Award from the American Foundation for the Blind for creating a tool called the Visual Impairment Scale of Service Intensity of Texas, which identifies the level of instruction a blind student needs in order to succeed. Darst, a multi-instrumentalist, is pictured singing to a student while at the Texas School for the Blind.


NACOGDOCHES, Texas — A career’s worth of experience teaching the blind and visually impaired — and preparing other teachers to do the same — was recently recognized at a national level for Stephen F. Austin State University’s Dr. Shannon Darst, assistant professor of education studies in the James I. Perkins College of Education.

Darst, who is currently the program facilitator for SFA’s visual impairment certification and orientation and mobility certification programs, received the Corinne Kirchner Research Award from the American Foundation for the Blind, an advocate for more than 32 million people living with vision loss, the keeper of the Hellen Keller Archive, and a major sponsor of deafblind-related research and policy.

Darst, along with cocreators Dr. Rona Pogrund of Texas Tech University and Dr. Michael Munro of the Region 6 Education Service Center of Texas, received the award for a learning tool called the Visual Impairment Scale of Service Intensity of Texas, or VISSIT, which identifies the level of instruction a blind student needs in order to succeed.

Created seven years ago, the validation and reliability testing of VISSIT has been conducted by three different researchers, and all research projects showed that the tool performed as it should each time.

“It’s tried and true,” Darst said. “This kind of changed the field at the educational level.”
The tool has revolutionized the deafblind teaching field, and that lasting impact led to Darst’s award issued earlier this month at the American Foundation for the Blind's 2022 Leadership Conference.

“Their groundbreaking work is changing the way itinerant vision professionals determine the appropriate type and amount of service each student with a visual impairment should receive,” the foundation announced about the VISSIT team. “This kind of guidance allows for more confidence that [teachers] will have adequate amounts of time to provide quality services to students with visual impairments.”

VISSIT is now in use across the United States, and Darst expects it to be adopted in Canada. Having been extensively involved in visual impairment-related stakeholder groups, Darst’s role in the creation of the tool was on the mathematical and statistical end. She ensured the ranges were correct and that the validity and reliability testing had integrity.

VISSIT resources can be found at tsbvi.edu/vissit. To learn more about the Perkins College of Education, visit sfasu.edu/coe.