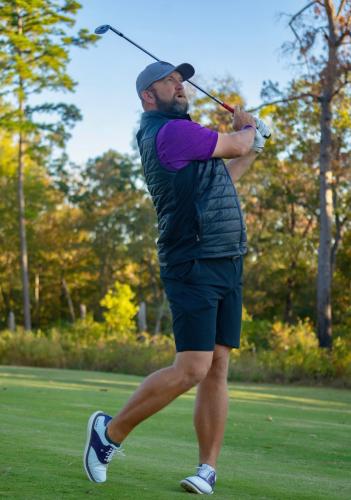 
NACOGDOCHES, Texas (BVM Sports) – Jonathan Shuskey has been busy since retiring from the military two years ago. The 20-year Army veteran just finished his first fall season with Stephen F. Austin State University golf after transferring from Christian Brothers University. The Lumberjacks played well but there is plenty to work on ahead of the spring season.

“I think we got some young guys and I count myself in that when I say young guys even though I'm 40 years old,” Shuskey said.

The fact that he is 40 and just starting his collegiate golf career has highlighted an amazing journey that Shuskey has embarked on with his family. It’s one that has become an inspiration not only to his kids, but to anyone who learns about the 40-year-old Army veteran playing DI golf.

“The whole experience has been amazing,” Shuskey said.

Technically, Shuskey is halfway through his sophomore year of college but this whole collegiate career is a part of an amazing second act.

The North Carolina native served in the 25th Infantry Division, the 101st Airborne Division, the 316th Cavalry Brigade and the 1st Security Force Assistance Brigade since 2001. During that time, he also did five combat tours and was awarded the Meritorious Service Medal and the Bronze Star twice.

It was also during his time in the military that Shuskey was able to grow his love for golf and set himself up for his collegiate career. But as a kid growing up in North Carolina, basketball was his main sport.

“Back when I was in school, I was way more focused on basketball,” Shuskey said. “I played basketball all the way through middle school and high school…When you grow up in North Carolina, you don’t have a choice but to enjoy basketball.”

He would play with his dad and a group of friends but as his dad’s health began to limit his ability to play basketball with Shuskey, the two began to make the transition to golf. Golf became a way for the two to bond and spend time together. It was around the same time Tiger Woods was beginning his amazing run as the best golfer in the world and the combination of the two helped develop Shuskey’s love for the game.

Shuskey would continue to love golf while in the Army and later in his military career, he had the chance to compete on the All-Army golf team. It was competing in those events that originally sparked his love for competitive golf and playing in tournaments.

He began to play in amateur events and through those events, he learned he had college eligibility. It meant he had a chance to play college golf.

“When I was presented with the opportunity like, ‘Hey man, you could go play college golf,’ that was a no brainer,” Shuskey said.

Deciding to pursue a collegiate golf career is one thing, actually finding the right fit for a 20-year Army vet is a whole other thing.

Shuskey got in touch with Lance Ringer of Golfweek to ask him for advice on how to proceed. Ringer suggested that Golfweek write an article about Shuckey and what he wanted to do to try to get the attention of as many people as possible.

The article worked and he soon had coaches reaching out to him either offering their help or asking him about joining their program. Eventually, Shuskey found a home with CBU in Memphis.

“CBU, it just felt like a good fit for me,” Shuskey said.

Last year as a freshman, Shuskey had one top-10 finish, four top-15 finishes and his lowest round was 65. It was a great fit and Shuskey was falling in love with Memphis; he’s still a Grizzly. He would call his family with his wife and kids after tournaments and they would ask him, “Did you beat up on the young kids?”

However, he was far from his wife's kids who were still in Georgia and so after first trying to get the family up to Memphis, Shuskey began looking to transfer closer to home. He had found some DIII and NAIA schools nearby, but then Stephen F. Austin reached out.

“Playing DI golf wasn't really the goal but once that opportunity came along, it was one of those things I knew I couldn’t pass up,” Shuskey said.

But he was considering passing it up because it would be farther away from the family than he would be if he stayed in Memphis. Luckily, his number one supporter, his wife, said in no uncertain terms that he can’t pass on this.

“She pretty much sat me down and was like, ‘Look, this is never going to happen again, nobody is going to be 40 years old, retired from the military and get the chance to play DI golf,’” Shuskey said. “‘You’re an idiot if you don't take this opportunity.’ She’s right and she normally is.”

She was right and the amazing journey Shuskey has been on has gotten even better. He is still an inspiration to his kids. They love to read the articles about him or see interviews. Following his official signing with SFA, his oldest son, who is also a sophomore in college, came up to him with five simple words.

“He was just standing there and out of the blue he was like, ‘You’re a Division I athlete,’” Shuskey said.

It is one of the main reasons he originally embarked on this journey. Shuskey wanted to inspire his kids and put into action what so many parents always tell their kids.

“I want them to see me doing this and go, ‘Well if dad can go play college golf at 40 years old, the opportunities for me are endless,’” Shuskey said. “I’m glad I’m in a position to show them that rather than just tell them that.”

Along with inspiring his kids, Shuskey also has the desire to compete and he also wanted to inspire veterans who are struggling with life outside of the military. He has seen first hand what happens to military veterans when that part of their life is over.

Shuskey is showing them that their life isn’t over when they leave the military. There can be a second act that is just as fulfilling as the first one.

His message has resonated with his fellow veterans and Shuskey says that his fanbase consists of two different groups. The first is fellow military veterans and the other is men around his age that are living vicariously through him. They love to see the ‘old’ guy go toe-to-toe with the young 20-year-olds.

All of it has earned him recognition on social media, NIL deals and the support of so many people. Shuskey is living out a dream, playing collegiate golf while getting an education. It might be happening 20 years later than most people but that has just helped him to inspire even more people to finally go after their own goals.

“The goal is to be able to impact people,” Shuskey said.