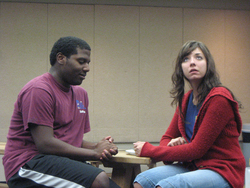 NACOGDOCHES, TEXAS - The Stephen F. Austin State University School of Theatre will open its 2011-2012 Mainstage Series with David Lindsay-Abaire's award-winning drama, "Rabbit Hole," on Tuesday, Oct. 4, in W.M. Turner Auditorium. The play will be presented at 7:30 p.m. each evening through Saturday, Oct. 8.

Recipient of the 2007 Pulitzer Prize for Drama, "Rabbit Hole" focuses on a young couple whose 4-year-old son was killed in an accident eight months prior to the opening scene.

"I wanted to do this play because I was amazed by its ability to deal with the situation head on without being at all sentimental or clichéd," said Scott Shattuck, director of the SFA School of Theatre and of the play. "It is an astounding affirmation of the importance and resiliency of family."

Shattuck acknowledged that some people might be hesitant to attend, thinking the subject matter might be too depressing.

"But that's not the case," Shattuck explained. "The characters are smart, worldly, naturally optimistic people who understand that everyone experiences loss and that each person must find his or her own way forward."

In conjunction with the play's five performances, the School of Theatre will also present "Survived By . . . ," a symposium on the experience of grief. Before or after each weekday performance, an expert will speak from either an academic or medical perspective on some aspect of grief.

A further expansion of the play's thematic material will be offered from 2 to 4:45 p.m. on Saturday, Oct. 8. The Rev. Dr. Brent Peery, director of chaplaincy services at Memorial Hermann Hospital, will give the keynote address, "Of God, Angels and Parallel Universes: The Spiritual Needs of Grieving Parents." All talks will be given in W.M. Turner Auditorium.

Visit www.theatre.sfasu.edu for a detailed schedule of speakers and their topics.

"Rabbit Hole," which is recommended for mature audiences, is a joint presentation of the SFA College of Fine Arts and School of Theatre. It is sponsored in part by Tipton Ford-Lincoln.