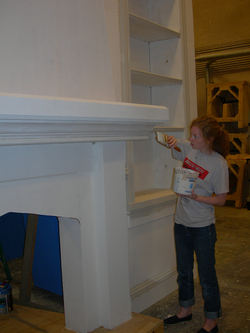 Houston junior Amelia Fultz applies a coat of primer to the set being built for the SFA School of Theatre's upcoming production of Tim Kelly's "The Uninvited." The classic ghost story will open at 7:30 p.m. Wednesday, June 29, in W.M. Turner Auditorium and run in repertory fashion with "Schoolhouse Rock Live!" through mid-July.

NACOGDOCHES, TEXAS - Inexplicable movement, lights, sounds and even smells suggest the presence of a an unwelcome "guest" in Tim Kelly's "The Uninvited," which the Stephen F. Austin State University School of Theatre will open at 7:30 p.m. Wednesday, June 29, in W.M. Turner Auditorium as part of its summer theatre season.

"As an alternative to the usual comic and musical fare we usually offer our summer audiences, we're presenting this fun, twisty tale of the supernatural," said Scott Shattuck, director of the SFA School of Theatre.

Not to be confused with the 2009 horror movie of the same title, this play is based on a novel by Dorothy Macardle about aspiring playwright Roderick Fitzgerald and his sister Pamela, new owners of a charming house in West England overlooking the Irish Sea, explained director Rick Jones, SFA professor of theatre.

The story was first brought to life in the 1944 movie of the same title starring Ray Milland, Ruth Hussey and Gail Russell. Martin Scorsese has pegged it as one of the 11 scariest movies ever made.

Jones predicts Kelly's play, too, will have the audience sitting on the edge of their seats. "It's what we don't know, the building of suspense, that creates the fear in us."