SFA to stage surreal comedy 'The Breasts of Tiresias' 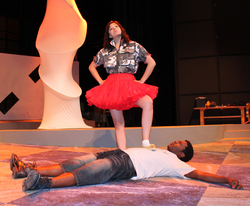 SFA theatre students Erin Whitmire and Lamar Jefferson rehearse a scene from the School of Theatre's upcoming production of Guillaume Apollinaire's surrealist play "The Breasts of Tiresias" in which the title character reveals to her husband that she is now a man.

NACOGDOCHES, TEXAS - "It's completely different from anything I've ever seen or done before!," exclaimed senior theatre major Erin Whitmire of Wink, who plays the title character in Stephen F. Austin State University School of Theatre's upcoming production of "The Breasts of Tiresias."

"And it's doubtful our audience will ever see anything like this again," added Nacogdoches senior Arrie Tucker, who plays one of the citizens of Zanzibar.

Written by Guillaume Apollinaire, who introduced the term "surrealism" in the play's preface, the comedy is full of unrealistic/illogical elements. In the main story line, Whitmire's character, Thérèse, decides to become a man and general in the army, leaving childbearing to her husband, who is portrayed by Lancaster junior Lamar Jefferson.

The surrealism is further seen in the exaggerated, cartoon-like visual effects and actions incorporated into the production. For example, in one scene two characters die after shooting each other with giant cardboard guns, then get up, and later repeat the action.

In most traditional plays, the sound effects are made off stage, out of sight. But in this production, the People of Zanzibar create the sounds in full view of the audience so that that their movements become a part of the play's action.

All of the unexpected elements, from the gender bending, to the unique set, to the characters' cartoon-like costumes and movements, enhance the play's comical qualities, explained Tucker. "They are so far out there that they're ridiculous and therefore funny."

Jefferson said he's never acted in a farcical comedy before, but he's having fun with all of the physical humor, as well as the transition he makes on stage as he sheds his masculinity and projects a feminine nature.

"We encourage everyone to come experience this play, to come and be entertained," Jefferson added.

"The Breasts of Tiresias" will be presented at 7:30 p.m. Tuesday, April 26, through Saturday, April 30, in W.M. Turner Auditorium, located in the Griffith Fine Arts Building, 2222 Alumni Dr. It is recommended for mature audiences.

The play is a joint presentation of the SFA College of Fine Arts and School of Theatre and is sponsored in part by Tipton Ford-Lincoln.