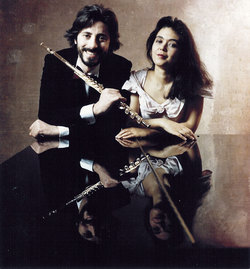 Raffaele Trevisani and Paola Girardi of Milan, Italy, will give a guest flute and piano recital at 7:30 p.m. Monday, March 7, in Cole Concert Hall on the SFA campus.

As performers in major halls throughout Europe, Asia, the Americas and South Africa, they are praised for their style and musicality, explained Dr. Christina Guenther, SFA assistant professor of flute. "We are delighted to have them perform on campus."

After receiving his diploma from the Giuseppe Verdi Music Conservatory in Milan, Trevisani quickly became a private student of Sir James Galway. For four years, Trevisani collaborated with the Orchestra of Teatro alla Scala in Milan, and for the last 20 years, he has been performing as a soloist with orchestras and in well-known music festivals all over the world.

Girardi also graduated from the Verdi Conservatory and then studied at the Respighi Academy in Assisi and the Chigiana Academy in Siena. She has studied with the Tchaikowsky Trio, Quartetto Academica, Fine Arts Quartet and Trio of Trieste.

As a collaborative artist, she has performed with Maxence Larrieu and Ilya Grubert, and regularly with Trevisani.

Both Trevisani and Girardi teach at the International Academy of Music of the Milan Foundation of Civic Schools.