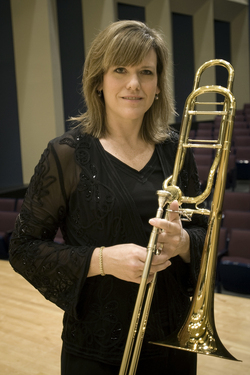 Scott and pianist James Pitts, SFA staff accompanist, will perform works for trombone spanning three centuries. "Elegia" by Grigori Kalinkowitsch and "Sonatine" by Jacques Casterede, both composed in the 20th century, will feature Scott playing the tenor, or most widely used, trombone.

Scott will play both the tenor and alto trombone while playing Robert Elkjer's arrangement of "Carmen Fantasy" by Georges Bizet. The five-movement work includes popular themes from Bizet's 1875 opera.

An active performer and clinician in classical and jazz styles, Scott teaches trombone and bass trombone at SFA and is the director of the university's The Swingin' Aces jazz band.

Currently, she is a member of the SFA Faculty Brass Quintet and Longview Symphony. She has also been a member of the Twentieth Century Unlimited Orchestra in Santa Fe, the New Mexico Music Festival in Taos, the Lubbock Symphony Orchestra, the Greeley (Col.) Philharmonic, the Orchestra of the Pines and the Barnum and Bailey Greatest Show on Earth Circus Band.

The recital is a joint presentation of the SFA College of Fine Arts and School of Music. Cole Concert Hall is located in the Wright Music Building, 2210 Alumni Dr.