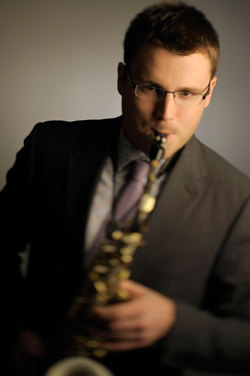 NACOGDOCHES, TEXAS - Dr. Nathan Nabb, associate professor of saxophone at Stephen F. Austin State University, will present a faculty recital of some of his favorite works at 7:30 p.m. Monday, Feb. 28, in Cole Concert Hall on the SFA campus.

Joining Nabb for part of the program will be pianist Ron Petti, SFA associate professor and director of accompanying. The duo will present Astor Piazzolla's "Historie du Tango" and Piet Swerts' "Klonos."

"Piazzolla's piece, which was written originally for flute and guitar, has quickly become a standard in the saxophone repertoire," said Nabb. "As the title implies, it depicts the story of the tango and its musical transformation, from the beginning of the 20th century to today."

Swerts' piece, which gained popularity among saxophonists in the 1990s after it was imposed in the International Adolphe Sax competition, is a "twisting, jagged work with complex syncopation and plenty of high notes," Nabb continued.

Marimbist Scott Harris, SFA associate professor of percussion, will join Nabb in presenting David Maslanka's "Song Book," a piece that incorporates and transforms themes from the works of J.S. Bach.

Nabb joined the SFA faculty in August. He has performed across the United States and in Asia and Europe in solo, chamber and large ensemble settings with such groups as the St. Louis Symphony, New World Symphony and IRIS Chamber Orchestra.

He has two current recordings to his credit: "Tangled Loops," which was released in 2009, and a recent release by the Oasis Quartet, for whom he plays soprano saxophone. His second solo recording, "Distances," will be out next fall. Nabb has also recorded with the Northshore Trio, and that album is expected soon on the BIS label.

After receiving his undergraduate degree from the University of Illinois Urbana-Champaign, Nabb earned his Master of Music and Doctor of Music from Northwestern University. His teaching and performance career is featured in an interview in the March/April 2010 issue of the Saxophone Journal.

The recital is a joint presentation of the SFA College of Fine Arts and School of Music and is part of the Cole Performing Arts Series.