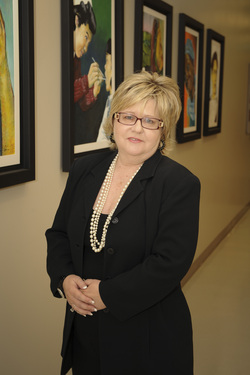 Dr. Glenda Walker, director of the Richard and Lucille DeWitt School of Nursing at SFA, recently named a National League for Nursing ambassador.

The director of the Richard and Lucille DeWitt School of Nursing at Stephen F. Austin State University has been named a National League for Nursing ambassador and will help keep faculty and administration members informed about the league's initiatives, grant opportunities, conferences, publications and workshops.

Dr. Glenda Walker will encourage participation in NLN professional development programs and research grant applications, as well as submission of abstracts and manuscripts for an annual education summit and the league's peer-reviewed journal.

According to Dr. Beverly Malone, CEO of the NLN, the ambassador program was created to make it as easy as possible for nursing faculty members and nursing programs at all levels of academia to enhance professional development.

"At the same time, we expect the ambassadors to communicate to NLN professional staff and the board what issues and challenges are of greatest concern to nurse educators in the field so that we can maximize the effectiveness of our programming and services," Malone said. "The ambassadors are, in effect, the NLN's 'eyes and ears' on campus. We are confident that the insights gained through this valuable relationship will help make the NLN more responsive to the needs of our dedicated nurse educators."

Walker has a master's degree and a doctorate in nursing from the University of Alabama in Birmingham. Her clinical specialty is psychiatric/mental health nursing, and she has more than 33 years of experience in nursing education administration, including experience in both private and public universities and in a health science center.

Walker developed the first specialty track in the nation for family violence at Vanderbilt University, where she taught psychiatric content for the family nurse practitioner program. As the associate dean of academic affairs and director of graduate nursing programs at the University of North Dakota, Walker developed a graduate program in rural health nursing and served as the director for graduate programs in nurse anesthesia and adult health.

In 1987, Walker moved to an administration position at the University of Texas Health Science Center in Houston. She was associate dean of clinical and community affairs and the director of nursing research at the Harris County Psychiatric Hospital and developed and implemented the University of Texas Nursing Service Center while serving as associate dean of the School of Nursing.

In 1991, Walker received a National Institute of Nursing Research grant, which focused on sexual abuse, and she has more than 30 published articles. In addition to generating more than $3 million in grants and gifts, Walker has been a federal grant reviewer for the Office for the Advancement of Telemedicine.

In 2004, Walker was elected to the Nacogdoches Women's Hall of Fame. She is an alumna of Leadership Texas and is a past president of the Texas Association of Deans and Directors.

The NLN Ambassador Program was established in fall 2006 with members who teach in all types of nursing programs - practical nurse, associate degree, diploma, baccalaureate, master's and doctoral. Today, there are more than 700 ambassadors representing schools of nursing in 49 states plus Canada, Guam and the Virgin Islands. The league offers professional development, networking opportunities, testing services, nursing research grants and public policy initiatives to its 35,000 individual and 1,200 institutional members.