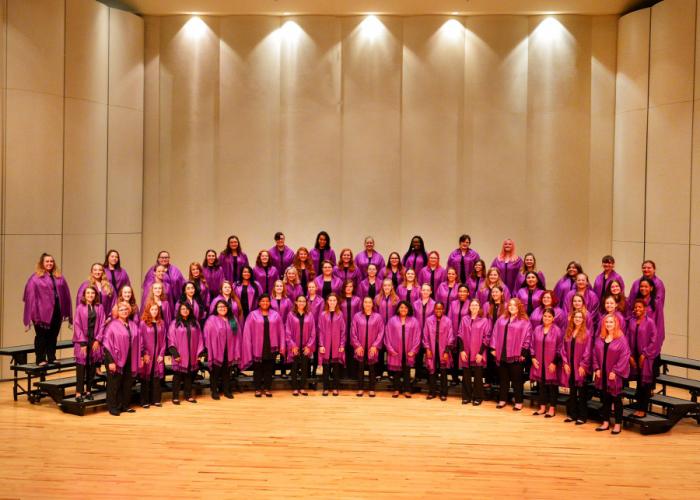 The SFA Women’s Choir has been selected to perform at the upcoming Southwest American Choral Directors Association conference in Little Rock, Arkansas.

“This work was written in 1943, while the United States was in the middle of our involvement in World War II,” Fish said. “The work, based upon writings of Thomas Jefferson, speaks to the freedoms we have as a nation. The work is a testament to those who bravely fought and sacrificed for the liberties we enjoy today.”

The concert will also serve as a sendoff for the Women's Choir when they travel to Little Rock, Arkansas, to sing at the Southwest American Choral Directors Association conference.

“Performing at this conference is a tremendous opportunity for our vocal/choral area and School of Music, as it is the first time for one of our secondary choirs to receive such a distinction,” Fish said.

Following the concert theme of “Testaments,” Fish explained that the Women’s Choir’s selection to perform at SWACDA “is a testament to those who have helped the choir achieve this honor.”

“It is a testament to the women who have committed themselves to excellence in previous years as members of the Women's Choir,” he said, adding that being chosen for an ACDA conference requires three consecutive years of outstanding performance recordings. “It is a testament to the leadership of Director of Choral Activities Dr. Michael Murphy, as we changed the makeup of our choirs to create the Women's and Men's choirs with the hopes of possibly being chosen for an ACDA convention in the future, and the future is here. It is a testament to our voice faculty and their overwhelming support of our choirs.

“It is also a testament to our School of Music Director Dr. Gary Wurtz and College of Fine Arts Dean Dr. A.C. “Buddy” Himes, as they supported and helped secure funding for our travels,” Fish added. “I am grateful to everyone whose efforts played a hand in this opportunity, especially our students.”

Zielke and Simmons will conduct the second and third movements of “Testament of Freedom,” respectively, while Nixon is featured on the challenging orchestral reduction of Thompson’s work.

The Women’s Choir will be joined by Dalmas and Meyer on Jake Runestad’s “Sing, Wearing the Sky.” The faculty members will also join the choir for its Little Rock performance. Brandon William’s arrangement of Clara Schumann’s “Er ist gekommen” will feature collaborative pianist Oh on what Fish described as “a virtuosic accompaniment.”

In addition to the Thompson work, the Men’s Choir will perform Paul Rardin’s raucous piece, “Sound Off,” which Fish described as “a testament to dudes being bros.”

“It will be great fun for the Men’s Choir and audience alike,” he said.

The Women’s Choir will reprise works from its fall concert by Runestad, Schumann/Williams, and Einojuhani Rautavaara, but will finish out the program with Sarah Quartel’s “Birds’ Lullaby” and “Music Down in My Soul” by Moses Hogan.