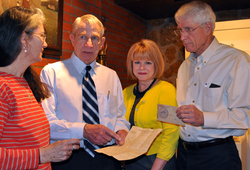 NACOGDOCHES, Texas - The family of historic Nacogdoches figure Karle Wilson Baker recently donated some of her personal artifacts to the Stone Fort Museum at Stephen F. Austin State University. The donation precedes the April 10 unveiling of a statue of Baker, honoring her contributions to Nacogdoches and Texas history.

Baker's grandchildren, including Thomas E. Baker and Jerry Baker and his wife, Dianna, donated the materials, which include a letter and postal cachet from the Stone Fort and Texas Centennial celebration, along with costumes belonging to Karle and her daughter, Charlotte.

The letter, written to Baker by her husband, Thomas E. Baker, is dated Oct. 16, 1936 - ¬¬ the day of the rededication of the Old Stone Fort. The fort was rebuilt on the Stephen F. Austin State Teachers College campus as part of the Texas Centennial celebration. The envelope bears a 3-cent Texas Centennial commemorative stamp and a hand-stamped Centennial Celebration emblem. The items will become part of the museum's permanent collection.

The public is invited to attend the Karle Wilson Baker statue unveiling at 4 p.m. Wednesday, April 10, at the corner of Mound and Hughes streets, where Baker's family home was located. Copies of Sarah Jackson's biography of Baker and Baker's book, "Birds of Tanglewood," will be available for purchase at the event.

The statue honoring Baker is the newest in a series of historic statues that make up the Heritage Walk, sponsored by the Friends of Historic Nacogdoches Inc. The artwork is funded by donations from the community, and donations are still being accepted for the Baker statue.

For more information about the event or to make a contribution to the statue project, contact Dr. Perky Beisel at (936) 468-2093.