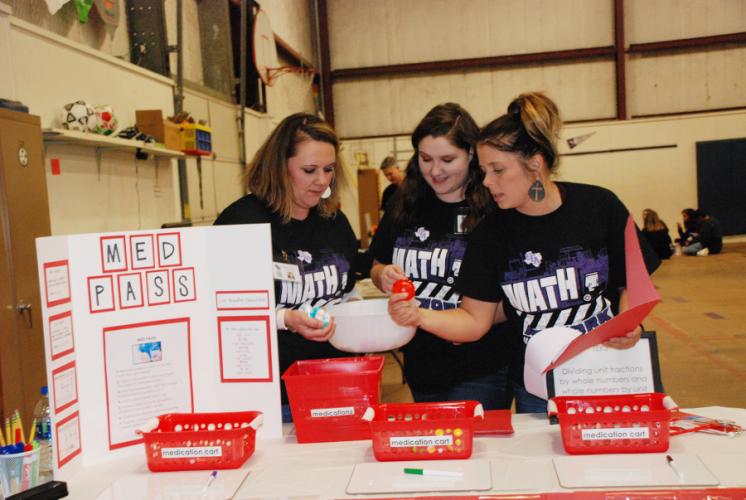 Wensdy Maldanado, Alex Smith and Amy Almanza, Stephen F. Austin State University elementary education seniors from Jacksonville, Hudson and Palestine, respectively, help Smith prepare her Mathematics Career Carnival lesson for fifth graders Dec. 2 at the Nettie Marshall Academy of Dual Language, an elementary school in Nacogdoches. At the carnival, fourth and fifth graders learned how to connect what they're learning in math class to real-world careers. Smith's Med Pass lesson taught fifth graders how to calculate the correct doses of medication by dividing whole numbers by unit fractions and vice versa. Maldanado, Smith and Almanza are participating in the James I. Perkins College of Education online completer program for teacher candidates, so they can complete their degrees while working and raising families.


NACOGDOCHES, Texas - In the gym at the Nettie Marshall Academy of Dual Language, an elementary school in Nacogdoches, fourth and fifth graders are solving math problems tied to real-world careers instead of playing basketball.

At Mathematics Career Carnival, the lessons are designed and taught by Stephen F. Austin State University teacher candidates. This past fall, fourth and fifth graders at the SFA Charter School and Nettie Marshall participated in the carnival. Emeline Carpenter Elementary School will host the event April 24.

Dr. Mark Montgomery, SFA assistant professor of elementary education and a faculty advisor for the Mathematics Career Carnival for the past four years, said this event "helps teacher candidates understand how easy it can be to engage young learners in problem-solving mathematics tasks and to connect classroom learning with real-world careers."

He added, "It also shows them that sometimes you have to teach on the fly and adjust for a student who needs support to be successful or who is ready to extend his or her learning."

The event on Dec. 2 at the dual-language academy offered an added benefit: "We got to work with students who are learning English as a second language," said Amy Almanza, an elementary education senior from Palestine.

Most of the 30 teacher candidates at the Nettie Marshall Mathematics Career Carnival were participating in SFA's online completer program in the James I. Perkins College of Education. They have earned credits at other colleges, sometimes for other degrees, that they're applying toward an education degree at SFA.

Some of these teacher candidates are taking classes while working and raising families in cities outside Nacogdoches. Some are building the path toward second careers. They're all completing their degrees mostly through online courses and discussion boards using technology SFA has invested in such as D2L.

Almanza chose SFA to complete her degree because, "It was the most accommodating school. The professors here understand we have busy lives outside school."

Dr. Paula Griffin, an SFA associate professor of elementary education and a faculty advisor for the Mathematics Career Carnival, has taught in the online completer program since 2006. "SFA has partnerships with many community colleges to help ensure these completers can seamlessly transition into their coursework here," she said.

Almanza has a full-time job as a preschool teacher for Palestine Independent School District, but she wants to teach and coach older students in high school. She also has two kids of her own.

"The online courses work perfectly for me," she said. "I'm able to complete my whole degree and keep my job. And because I'm already teaching in my school district, I've got my foot in the door for other jobs at PISD."

Wensdy Maldanado, an elementary education senior from Jacksonville, has worked the past 10 years as a personal loan officer. Though she found that job rewarding, she "wanted to help people learn and grow. Plus, I want to work from 7 a.m. to 3 p.m. instead of 7 a.m. to 7 p.m.," she said.

Alex Smith, an elementary education senior from Hudson, earned a nursing degree in 2014 and passed her state nursing exams in 2015. Though she enjoyed working with her patients, who were mostly elderly residents at nursing homes, she grew frustrated at the lack of resources these facilities face.

Smith took a job as a school nurse and started substitute teaching for the Hudson Independent School District. "I truly always wanted to be a teacher, but face-to-face classes weren't practical at this point," she said.

SFA's online completer program offered Smith a way to use the core credits she'd already earned for her nursing degree toward an elementary education degree.

Almanza, Maldanado and Smith met in their first online education class, and the trio formed a study group. "You have to have a support group when you're earning a degree online," Almanza said.

For online teacher candidates, experiences like Mathematics Career Carnival offer not only valuable training with elementary school kids but also a chance to interact in person with classmates and professors.

"This wasn't a mandatory event, but we wanted to do it," Maldanado said. "We saw it as an opportunity."

Smith's experience as a nurse came in handy during the carnival. She used a real-world situation - diagnosing patients and prescribing the appropriate medications for them - to teach Nettie Marshall fifth graders about whole numbers and fractions with her lesson, Med Pass.

"To give the right dose of medicine to the right patient, the fifth graders have to be able to divide whole numbers by unit fractions and vice versa," Smith said.

In the end, Mathematics Career Carnival helped both teacher candidates and elementary school students focus on their future careers.

For more information about online completer programs in the Perkins College of Education, email ec6online@sfasu.edu.