SFA School of Theatre to present virtual performances of ‘No Exit’ 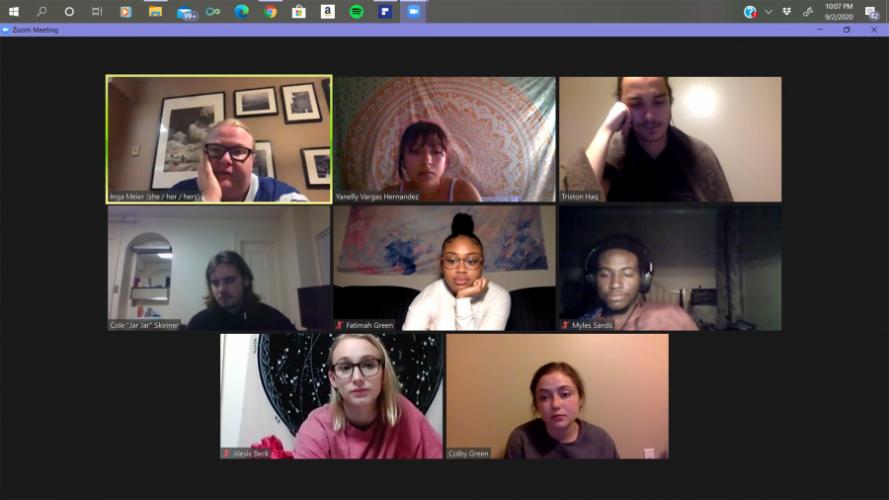 “No Exit” finds three strangers encountering one another in a strange room and trying to make sense of their new surroundings and the lives that have led them to this place, according to Dr. Inga Meier, assistant professor of theatre at SFA and the play’s director. She said she selected “No Exit” last spring to be included in this year’s Mainstage Series lineup for a number of reasons, the most important of which being the uncertainties of the pandemic and the ability of the play to translate well into a virtual format.

“Not knowing what the state of the pandemic would be in the fall, I wanted to err on the side of caution and plan for the show to be virtual from the beginning,” she said. “I also wanted to make sure that if students elected to not return in the fall, they would still have an opportunity to audition and participate in the season.”

In having made that decision, Meier began looking for shows that could not just work in a virtual setting, but that would actually benefit from one.

"‘No Exit,’ which is set in hell, proved a perfect choice, as the virtual space can actually function to enhance the play's setting,” she said, adding that she was also influenced in selecting the Sartre play by two recent television shows – “The Good Place” and “Upload” – the first of which was inspired by “No Exit.”

“Both define hell in interesting, innovative ways that defy expectations,” Meier said. “Placing the characters within the confines of a zoom setting, I think, will open up similar opportunities.”

Even with the strides made in recent months to teach and perform in remote environments, making the technology of a virtual performance work the way you want continues to be a challenge.

“Obviously, we're going to have to wrestle with technology in innovative ways,” Meier said.  “However, the Festival of New American Plays in the spring, and ‘The Tempest’ in the summer (both of which were presented virtually), made some really great inroads in this regard that we hope to build on and develop further.”

Meier said that the performance style required by Zoom and YouTube is different from a theatrical one. There are always going to be differences when you introduce a camera, “especially if that camera is attached to a computer,” she added.

“On the other hand, the camera itself will also constrain the acting space itself, which will also impact the performances,” Meier said.

Finally, because theatre is essentially based on the fundamental premise of the interaction between actor and audience, actors' performances tend to rely on audience feedback, whether it be laughter, silence or something else, Meier explained.

“The Zoom space does not allow for that direct interaction, and actors will face challenges navigating the absence of that feedback,” she said. “All of that being said, students who earn degrees in theatre may later find themselves working in film or television, and this show provides an excellent opportunity to help them develop some of those skills.”

Although the play explores mature themes, “No Exit” will appeal to a wide audience, Meier said.

“The play is set in hell, so the characters are obviously flawed and perhaps best understood by audiences that would be considered PG,” she said, “but the questions it explores regarding the lies we tell ourselves are universal ones.

“Ideally, theatre entertains, enlightens and teaches us something about ourselves,” she added. “I think this play has the capacity to do all of those things. However, with so much going on in the world right now, I also hope that it provides a respite for people to be transported for one to two hours.”

The virtual performance is at 7:30 nightly for the three-night run. To purchase online access, which starts at $7.50 with additional donations accepted, visit boxoffice.sfasu.edu , or call (936) 468-6407 Monday through Friday for online purchasing questions. Livestream access sales end at 1 p.m. daily during the run, and links are emailed after 4:30 p.m. each day. For more information about the School of Theatre, visit theatre.sfasu.edu.