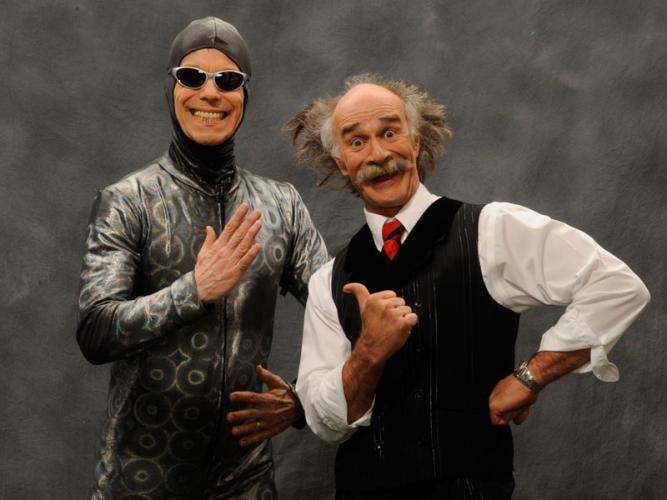 The all-time favorite Super Scientific Circus returns to SFA on Friday. Feb. 28. This CPAS performance is sponsored by Nacogdoches Pediatric Dentistry. A few seats are still available for the 12:30 p.m. performance.


NACOGDOCHES, Texas – Only a few seats are still available for the afternoon performance of the widely popular Super Scientific Circus scheduled to be presented on Friday, Feb. 28, in W.M. Turner Auditorium on the campus of Stephen F. Austin State University.

The SFA College of Fine Arts’ Children’s Performing Arts Series has brought the exciting science-related show featuring Mr. Fish and Trent the Mime to Turner stage many times, and every visit is always well-received by students and their teachers, according to Diane Peterson, Fine Arts Box Office manager and director of the series. This year, the morning show is sold out, but limited seating is available for the afternoon, Peterson said.

The program, which targets students in kindergarten through 12th grade, is designed to “help students understand that science can be appreciated in everything we see and do,” Peterson said.

“We want to thank Nacogdoches Pediatric Dentistry for helping us bring this program back to the SFA campus so East Texas area students of all ages can better understand how science can be fun,” Peterson added.

This year’s children’s series concludes on Tuesday, April 28, with the beloved story of “Cinderella,” presented by The Panto Company USA. Bullied by her two mean stepsisters, Cinders’ future looks bleak until her Fairy Godmother casts a spell and sends her to the ball. True to the story, “Cinderella” is full of original modern songs, bursting with hilarity and has a happy ending. This show is for students in pre-kindergarten through fifth grade and will be presented at 9:30 a.m. and 12:30 p.m. in Turner Auditorium.