Then and Now: Alumna shares her and great-grandmother’s SFA experience 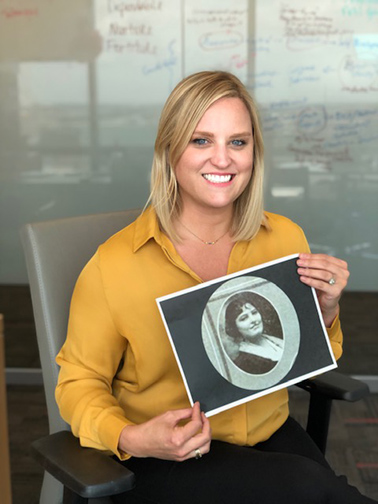 Stephen F. Austin State University alumna Heather Dulin holds a photograph of her great-grandmother, Ibby Inez Fuller, who attended the university in the 1920s. While separated by nearly a century, the two shared a Lumberjack bond through their SFA experiences.

“It’s incredible to think my great-grandmother attended the same university I did 82 years earlier,” Dulin said. “While our lives in Nacogdoches and on campus were different, I know we were in search of the same thing — a formative educational experience centered around learning and growing to be better women. And that’s exactly what we achieved.”

Raised by a single mother, Dulin said she didn’t know how she was going to afford college, but she knew she “was destined to make it happen.” Much like her great-grandmother, who attended SFA in the 1920s when it was somewhat uncommon for women to pursue higher education, Dulin was determined.

“My great-grandmother was the only woman in her family who considered attending college, and with the evolution of women’s rights, I imagine she was met with opposition and confusion. Still, she persisted,” Dulin said.

Moving from Corrigan to Nacogdoches, Fuller worked for a local family doing household chores and caring for the children in exchange for her room and board. She also took some classes at the high school while the SFA campus was under construction.

Fuller was involved in the formation of women’s athletics at SFA as a leader in both the tennis and volleyball teams. She was active in the women’s athletic association, which was organized in 1925 and promoted the idea that women should place more value on health and physical training. She studied home economics with a minor in physical education before changing her major to education.

“My great-grandmother, who passed away in March 2001, remains a legend in our family. She set the example for what it means to pursue what calls you,” Dulin said. “Against the odds that many cultural and societal norms of her time placed on her, she persisted with faith and dedication throughout her 98 years of life.”

Similarly, Dulin stayed the course to make her dreams of attending SFA happen. In 2005, she opened her SFA acceptance letter and applied for financial aid.

“I was sitting on the couch with my mom, and when I opened the card, purple and silver confetti poured onto my lap. It was a milestone moment to celebrate,” Dulin said. “It was a privilege to be at SFA, and I knew it. Learning about financial aid allowed me to truly appreciate the classes I took and assignments I turned in.”

A Houston native, Dulin studied general business before changing her major to psychology. She was involved in clubs on campus, including Psi Chi, the international honor society for psychology, and the American Marketing Association in the Rusche College of Business. As a student, she worked in the SFA Post Office and for Johnson’s Furniture Store.

Currently, Dulin serves as the human resources leader within the recruiting and talent development department for National Oilwell Varco, which allows her to mentor and speak to college students about their career journey and life after graduation. She remains an active member of the SFA community by serving on the Nelson Rusche College of Business Recent Alumni Board, which is focused on improving the student experience at SFA.

“People often think learning stops after graduation, but the truth is life is always trying to teach us something,” Dulin said. “Your family, peers, professors, the early mornings, the long chapters, the small towns, they are all playing a part of shaping who you are, so enjoy the journey.”