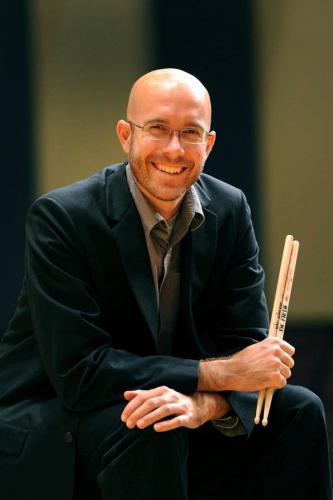 The recital is a joint presentation of the SFA College of Fine Arts and School of Music and is a feature of the Friends of Music Concert Series.

The program features Meyer’s own “Seven Images,” which he composed after returning from Slovenia where he presented clinics and performed in the fall of 2012. While there, he sampled as much of the culture and art as time would allow, spending a good amount of time in the city of Ljubljana.

“One of the many places I explored was its Moderna Galerija (Museum of Modern Art), which is located next to Tivoli, a park similar to Manhattan’s Central Park,” Meyer said. “As soon as I entered the museum, I was immediately captivated by several large-scale installations. These installations stayed in my memory long after I had left Slovenia. Because of my fascination with the museum and its art, I decided to create seven snare drum solos based off of seven of the most memorable installations and pieces of art I witnessed.”

Deane’s “Dis Qui Etude” is a concert work for solo vibraphone that was commissioned by and is dedicated to Robert Parks. The piece is a study of the sound a vibraphonist can produce by using a special mallet made from a commercial paint stir stick that has been modified. This hybrid mallet has many surfaces with which to strike or scrape in order to produce musical sounds, according to the composer.

Bobo’s “Tantrum” is an experimental composition for solo snare drum that contains four main sections and explores a wide range of tone colors on the instrument through the use of specified playing zones, special techniques that create a wide variety of timbres, and the extreme use of dynamics, the composer explains.

Viñao’s piece “Khan Variation”s features eight rhythmic variations based on a traditional theme from Qawwali music as sung by Ali Kahn. Viñao developed each variation by exploring a different rhythmic and melodic aspect of the original theme.