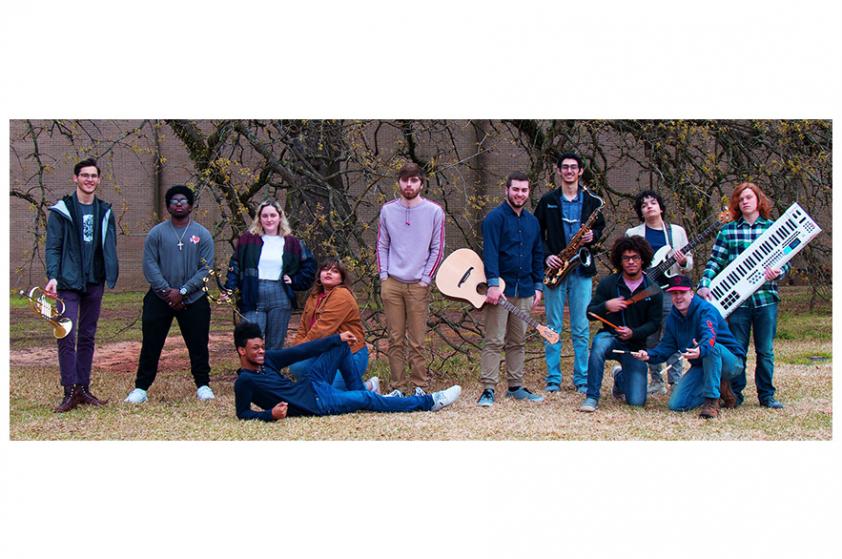 The SRT Contemporary Ensemble will perform at 7:30 p.m. Wednesday, April 10, in Cole Concert Hall on the SFA campus. The rhythm and blues concert will feature the music of Ray Charles, Anderson.Paak, The Fugees, James Brown and others.

Among the selections to be performed are “Celebrate” by Anderson.Paak, “Funky Drummer” by James Brown, “Killing Me Softly” by The Fugees, and “Hallelujah! I Love Her So” by Ray Charles.

The Contemporary Ensemble is one of the two commercial music ensembles within SFA’s Sound Recording Technology program; the other being the Rockin’ Axes, according to SRT faculty member Nicholas Lambson.

“All of our students study music technology and are also musicians,” Lambson said. “We perform popular music that many of the students are becoming fluent with, and the genres we perform each semester will change.

“This year, we are focusing on R&B music with its many sub-genres,” he said. “Besides being an amazing art form, it was a good fit for our students’ interests and the instruments they play, such as brass and woodwinds, in addition to drums, bass, keys and guitar.”

The program also features songs that were in famous court cases, including “Blurred Lines,” which was found to violate the copyright of Marvin Gaye’s “Got to Give it Up.”

Studying the legalities of the music business is also part of the SRT program.

“It’s good experience for our students to learn about the issues tied to the music they are playing,” Lambson said.

Other popular tunes on the program are “Oh Honey” by Delegation, “Son of a Preacher Man” by Dusty Springfield, “Valerie” by Mark Ronson and Amy Winehouse, “Sittin’ on the Dock of the Bay” by Otis Redding, “Just the Two of Us” by Grover Washington, “Got to Give it Up” by Marvin Gaye, “Blurred Lines” by Robin Thicke, “Funky Drummer” by James Brown and “What You Won’t Do for Love” by Bobby Caldwell.

“SRT student Conner Darnell has composed an excellent new piece this semester in conjunction with SFA faculty,” Lambson said. “We will be performing its world premiere at our concert.”

SFA student Travis Wattingney was hired last semester to do transcription work for the ensemble. “He did such a fantastic job, we hired him again,” Lambson said. “He helped with ‘Valerie’ by Ronson and Winehouse and ‘Celebrate’ by Anderson.Paak.”