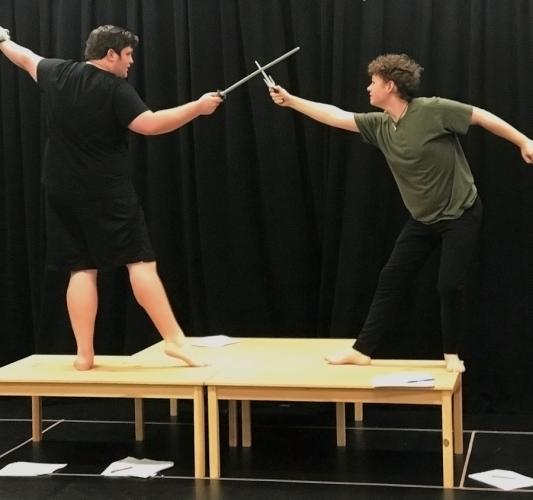 SFA theatre students, from left, Carson Cook, McKinney sophomore, as Captain Hook and Bayley Owen, Royse City junior, as Peter Pan rehearse a fight scene from “Tales of Neverland.” The School of Theatre will tour the original play in August at the Edinburgh Festival Fringe in Edinburgh, Scotland.


NACOGDOCHES, Texas – The School of Theatre at Stephen F. Austin State University will present a community preview at 6:30 p.m. Friday, July 26, of the original play students will perform next month at the prestigious Edinburgh Festival Fringe in Edinburgh, Scotland.

The preview performance will be in the HPE Complex Dance Studio, Room 201, on the SFA campus. The event is a fundraiser to offset travel costs of the trip.

For the third time, SFA theatre students will tour a play that will be seen at the largest performing arts festival in the world during a two-week trip to Edinburgh in August. This year, SFA dance students will be among those performing.

This year’s play is “Tales of Neverland,” a family-friendly stage adaptation written and directed  by School of Theatre professor Angela Bacarisse based on the book “Peter Pan,” J.M. Barrie’s most famous work.

The description on the festival’s website reads: “Make way for the Lost Boys! Join Wendy, Michael and John as they are whisked away to Neverland by Peter Pan and Tinkerbell. Watch as they tangle with vicious pirates and cheer for the boy who never grew up. Fusing spoken word with dance, the performers bring to life the beloved characters and fly through many adventures. An original script appropriate for all ages.”

The play’s choreography is by Heather Samuelson and movement direction is by Haley Jameson. Samuelson and Jameson are dance program directors in the SFA Department of Kinesiology and Heath Science.

Preview performance admission is $5 per person at the door. Additional donations to help with student costs to attend the festival will also be accepted.

The School of Theatre continues to seek out people who may want to help sponsor students and pay for trip expenses. For information on supporting the students, contact Bacarisse at abacarisse@sfasu.edu or (936) 468-1126. Tax-exempt donations can be made at sfasu.edu/giving by clicking on the “give online” tab and writing “Scotland trip” for special instructions.