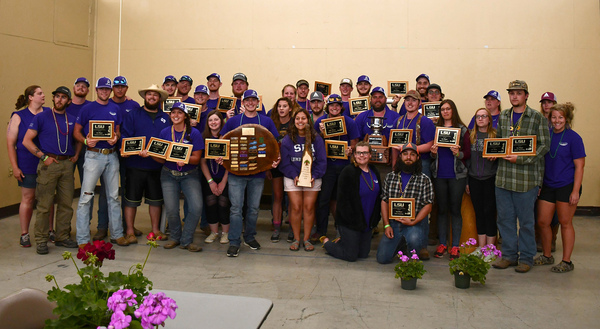 “This was the most talented and dedicated team I’ve seen since becoming the faculty advisor in 2012,” said Dr. Jeremy Stovall, associate professor of forestry.

The team competed in a series of challenging academic and physical events against 13 other universities from across the South, including Clemson, Virginia Tech and Auburn.

Although physical events, such as crosscut sawing, axe throwing and log birling, an event in which two competitors run on a floating log with the goal of pitching an opponent into the water, take center stage, excelling in the academic events is a key point of pride for the Sylvans.

As if placing first in both academic and physical events wasn’t enough, two SFA students sealed their positions in Southern Forestry Conclave history by setting records in two physical events.

For the first time in the 62-year history of the Southern Forestry Conclave, Tyler Jones, a junior urban forestry major, threw a perfect score of 15 by hitting five consecutive bullseyes in the axe-throwing event.

“The axe-throw competition was a lot of fun, and my throws went by like a blur,” Jones said. “Breaking the record at my first conclave was such a surprise.”

The Sylvans also were awarded the Sportsmanship Award for the team’s efforts in assisting Louisiana State University in executing the event, as well as for overall professionalism and support of other teams.

While the Sylvans primarily comprise forestry students, all majors are welcome to join. For more information on the Sylvans, contact Stovall at stovalljp@sfasu.edu.