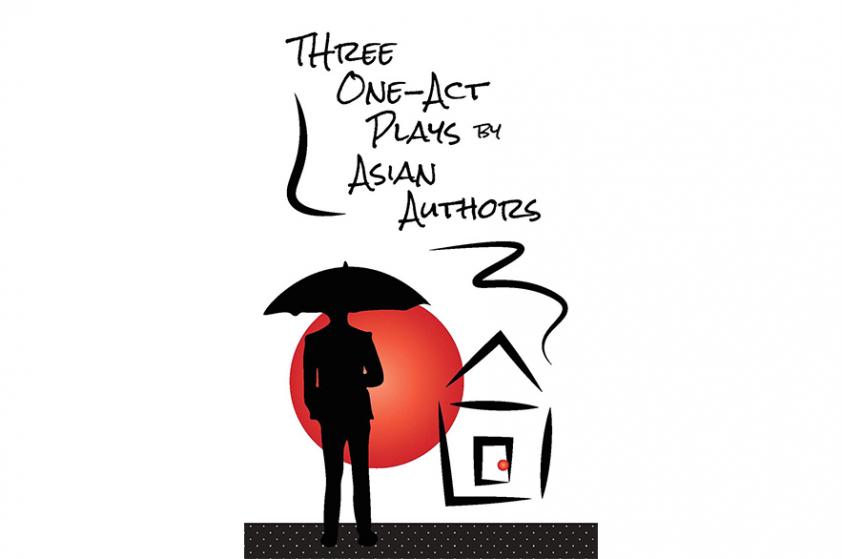 “There are few opportunities to encounter work by non-Western playwrights,” Jones said. “I’m pretty certain we’ve never had anything by an Asian playwright on our Mainstage – certainly not in the 18 years I’ve been here. So this represents an opportunity for local theatregoers to see something they haven’t really encountered before, at least in Nacogdoches.”

Jones describes Tagore’s “The Post Office” as a “sad but beautiful play” about a young boy, Amal, who is dying of an unspecified disease. He remains remarkably upbeat and curious about the wider world, however, and dreams about being a postman, or even receiving a letter.

“He is teased by the bullying town headman, who pretends the illiterate boy has received a letter from the king, who is sending the Royal Physician to assist in Amal’s recovery,” Jones said. “But the Royal Physician really does show up…”
Mishima’s “The Lady Aoi” is an adaptation of a 14th-century Noh play, “Aoi no Uye,” possibly by the greatest of Noh playwrights, Zeami Motokiyo, Jones explains. The Noh play, in turn, is derived from the 11th-century novel “The Tale of Genji” by Murasaki Shikibu.

“In the original, Genji is a prince; in this adaptation, the equivalent role is Hikaru Wakabayashi, a successful businessman,” Jones said. “His wife, Aoi, is ill, and the doctors are unable to find a cause. Hikaru’s ex-lover, Yasuko Rokujo, shows up at the hospital and cheerfully claims that her spirit has left her body and is torturing Aoi.”

The two central characters in Gao’s “Hiding from the Rain” are young women who, as the title suggests, seek shelter under a makeshift tent in a rainstorm.

“As they discuss their jobs, their lives and their dreams, they are unaware of the presence of an old man on the other side of a barrier who silently hears every word,” Jones said.

In selecting a play to direct for this year’s Mainstage Series, Jones said a course in Asian theatre he was scheduled to teach this spring was a consideration. School of Theatre Director Cleo House Jr. suggested Jones direct a show in the intercultural/world theatre category, “so we talked about the possibility of doing something Asian,” he said.

The course includes Indonesia, Vietnam and Korea, but the overwhelming majority of what is discussed is Indian, Japanese or Chinese. Jones said he started thinking about which to do and concluded, “what about all three?” He has previously taught “The Post Office” and “The Lady Aoi,” and he liked the full-length plays he’d read by Gao.

“I looked to see if Gao had written any one-acts,” he said. “I found ‘Hiding from the Rain’ online, and thought the language, even in translation, was beautiful.”

He submitted the evening of three plays as one of his proposals for the season, and that was the one the Mainstage selection committee chose. Jones says it is important to note that two of the three playwrights, Tagore and Gao, are Nobel Prize-winning authors, and the third, Mishima, was a finalist.

“It’s also important that we not be perceived as trying to present ‘authentic’ Asian plays,” he said.  Jones has a doctoral minor in Asian theatre, and he taught courses Eastern civilizations for a year at the University of Kansas, but the distinction being made with these selections is that these are not “Asian plays,” but “plays by Asian authors,” he said.

“All of these plays are modern in theatre history terms,” he said. “The oldest, ‘The Post Office,’ was written in the early 20th century. We’re not using any traditional forms – no dance drama, no masks, no exaggerated makeup. The idea is to look at these plays as stories with universal appeal rather than to try to suggest that our students can ‘be Asian.’

“These plays are about people, not Indian people or Japanese people or Chinese people. Gao even crafted his plays so there were never any blood relations between characters who were seldom identified further as more than young or old. This was intentional, so actors of whatever race or body type could play his roles.”

Jones believes that each of the stories is relatable to the audience, and each conveys a message of how people are more alike than they are different from one another.
“These plays might have a couple of character names that don’t sound familiar, but otherwise they’re a romantic fantasy, a ghost story, and a slice of life, and very recognizable to Westerners in those terms,” he said.

“Three One-Act Plays by Asian Authors” will be presented at 7:30 p.m. Tuesday through Saturday, Feb. 26 through March 2, in W.M. Turner Auditorium in the Griffith Fine Arts Building, 2222 Alumni Drive, on the SFA campus.