SFA art student to compete in ‘Forged in Fire’ episode 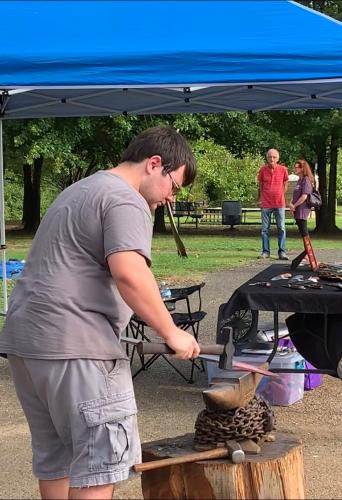 SFA art student Kevin Burgess of Nacogdoches will compete on the reality show “Forged in Fire” at 9 p.m. Wednesday, Nov. 20, on the History Channel.


NACOGDOCHES, Texas – A Stephen F. Austin State University art student will compete in an episode of “Forged in Fire” that will air between 9 and 10 p.m. Wednesday, Nov. 20, on the History Channel.

Nacogdoches junior Kevin Burgess is an art metals student studying with Lauren Selden, professor of metalworking and jewelry in the School of Art.

Produced by Outpost Entertainment, “Forged in Fire” is a competition in which four bladesmiths compete in timed elimination rounds to forge bladed weapons for a chance to win a $10,000 prize and be named a “Forged in Fire” champion. In its seventh season, the competition, which is judged by experts in weapon history and use, tests some of the best in the industry as they attempt to re-create historic weapons.

The road to the reality series competition began in the summer of 2018 when Burgess, at the urging of a friend and fellow bladesmith, signed up online as a contestant. After an initial  screening process, Burgess was required to complete a form where he outlined his experience and described the bladesmith equipment he used and the longest blade he had forged.

“They required you to have forged at least a 15-inch blade at some time in your career, and at that point, I had forged a blade only about 13 inches long,” he said. “I had a big chunk of material left over from another project, so I went crazy and forged a full 32-inch arming sword.”

Burgess was then contacted by show officials for a Skype interview where he displayed some of his creations. From that point on, it was a waiting game until this past summer when he was contacted again for a final interview to determine if he would actually compete. In early August, he flew to the forge location where filming began.

The results of the competition will be aired Wednesday night.

Burgess first became interested in bladesmithing about four years ago after watching “Man at Arms: Reforged” YouTube videos where skilled bladesmiths recreate weapons from TV shows and video games. He is currently a member in and an apprentice with the American Bladesmith Society, hoping to eventually pursue journeyman distinction.

He started his college career at SFA studying computer science but soon changed his major to art where he could follow his passion. Following graduation, he plans to earn a master’s degree with the hope of teaching bladesmithing at the college level.

“Bladesmithing is something I am really passionate about,” he said, “and I’d like to pass that on to the next generation.”