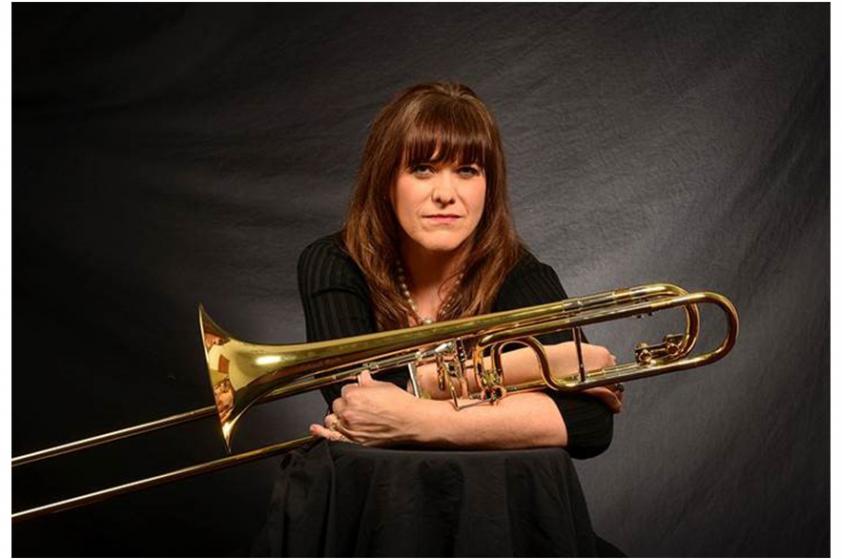 Among the varied works to be featured is "Pearls II” by Roland Szentpáli, a Hungarian composer and world-renowned tuba player. This second piece in his series of three “Pearls” was originally composed for either trombone or euphonium, but is usually played by a euphonium player, according to Scott.

“It is a highly technical piece of three movements, each one composed in a different jazz style: swing, ballad and Latin,” she said.

Dr. Ron Petti, director of accompanying at SFA, will perform with Scott and will be featured on “Rhapsody” by Michael Schneider, who is a collaborative pianist and composer in the Dallas area.

“The unique part of this composition is that the trombone will be used as the accompanying voice rather than the primary,” Scott said.

Also included on the recital is one of Arthur Pryor’s compositions, “Annie Laurie.” Pryor was a virtuoso trombone soloist with John Philip Sousa’s band from 1892 to 1902.

“Once after performing for a German audience, he was ordered to take his trombone apart, for they refused to believe that anyone could play the trombone so well, claiming his performance was a ‘Yankee trick,’” Scott said.

A fun part of the recital will involve audience participation. For an undisclosed piece of music, the audience will be asked to guess the different insects represented by Scott’s performance. Winners will receive a small prize.

The concert is a presentation of the College of Fine Arts, School of Music and the Friends of Music Concert Series. Tickets are $8 for adults, $6 for seniors and $3 for students and youth. For tickets or more information, call the SFA Fine Arts Box Office at (936) 468-6407 or visit www.finearts.sfasu.edu.