Young Nacogdoches pianist to perform on 'From The Top' 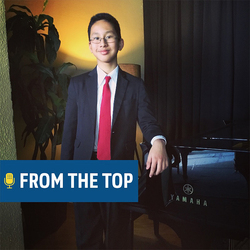 Twelve-year old Nacogdoches pianist Antonio "Nio" Ajero, son of SFA piano professor Mario Ajero and his wife Gina, has been invited to perform on "From The Top" with host Christopher O'Riley when it comes to LeTourneau University's Belcher Center in Longview on Saturday, March 25.

NACOGDOCHES, Texas - Twelve-year-old Nacogdoches pianist Antonio "Nio" Ajero has been invited to perform on "From The Top" with host Christopher O'Riley when it comes to LeTourneau University's Belcher Center in Longview on Saturday, March 25.

"From the Top" is considered America's largest and most prestigious national platform dedicated to celebrating the stories, talents and character of classically trained young musicians. The show, distributed by National Public Radio, has an audience of more than a half million listeners tuned into more than 220 radio stations nationwide. Red River Radio and The Belcher Center are sponsoring the Longview performance. The show is at 7:30 p.m., and Nio will perform Caprice á la Scarlatti in G major by Ignacy Jan Paderewski.

Although Nio is no stranger to performing before large audiences - he has performed a solo recital annually since he was 6 years old at Stephen F. Austin State University where his father is a piano professor - NPR's "From The Top" is probably his most high-profile performance to date, according to his dad, Dr. Mario Ajero.

"Nio started piano lessons with me when he was about 3 years old," Ajero said, "and it was a great learning experience, both from his perspective as a student and with my dual role of parent/teacher, to have untethered access to each other throughout the week rather than just the traditional weekly piano lesson meeting.

"That allowed us to move at an accelerated pace and make piano study a central component of his educational development," he said. "Both he and his younger sister, Olivia, have served as sort of 'experimental students' in my research interests in incorporating technology in piano pedagogy, and they both have reaped the benefits of that."

Nio has been a featured performer at conferences in which Ajero presented, ranging from the TEDx Conference hosted at SFA to the Australasian Piano Pedagogy Conference in Australia. These opportunities built up his confidence, leading him to win the Red River Radio Young Artist Competition multiple times. He received first prize at the Southern Methodist University Institute for Young Pianists Competition and, most recently, first prize at the Baylor/Waco Piano Competition earlier this year. Nio's most notable achievement was when he was awarded the National Gold Medal from The Royal Conservatory Music Development Program last year for earning the highest score in the United States in their Level 9 Piano Exam.

In addition to studying with his father, Nio takes piano lessons with Linda Parr in SFA's Music Preparatory Division, which, with Parr's "meticulous attention to details in performance," has further prepared him for this opportunity to perform for a national audience, Ajero said.

"Nio has an outstanding pianistic talent with an innate ability and confidence to communicate what he believes to be the strongest interpretation of whatever he is playing" Parr said. "I've discovered countless times that he 'gets' and retains both subtle and the more complex musical and artistic ideas. He has perfect pitch, memorizes quickly, and is truly excited to perform at each lesson.

"Nio constantly surprises and even overwhelms me with his live performances in both recitals and competitions," she added. "He is growing quickly as a musician and a pianist, and is now growing into a young man, as well. He communicates beautifully, more consistently, and I believe the ongoing 'musician' part will include future experiences with chamber music, accompanying, probably conducting and composition, as well."

Nio has his eyes on "the big name schools," like Juilliard, the Curtis Institute and New England Conservatory, to name a few. But he and his parents try to stay grounded in understanding that it is a highly competitive field, and there are countless other pianists out there who seek similar opportunities.

"He definitely sees music as the focus of his future career," Ajero said. "We'll see how far he can go on the concert stage, but I was flattered to learn that he hopes to teach and maybe run his own studio or music school one day and perhaps with his sister!"

Performing on "From The Top" also involves a three-day commitment where Nio and the other performers will receive training through the initiative's Arts Leadership Program and will prepare an outreach musical program for one of the local Longview schools.

Parr sees the NPR performance as a possible gateway to future opportunities, as well as a confidence builder.

"I suppose that this could be a pivotal moment for him in that it may reinforce his desire to become the best pianist and musician possible," she said. "Such a public forum may connect Nio with many wonderful future contacts and opportunities for performance. I have high hopes for him to continue developing in a healthy way with many new friends, mentors and creative outlets to share his love of music. Nio has a wonderful family - hardworking, but also fun-loving. He is the sweet guy he is because of that constant support."

Both Nio's father and mother, Gina, are obviously proud of their son's accomplishments, but the national NPR performance holds "particular significance."

"We've listened to the show for years now, and it feels unreal that Nio will be a part of it," Ajero said. "It is a tremendous honor for Nio and might give him hope to attain similar accolades in the future. At the same time, we are also delighted that, despite all these successes, Nio remains a down-to-earth, nice and compassionate person. I don't think many parents could ask for more than that."

Tickets to the performance are available for purchase at the Belcher Center website: https://belchercenter.ticketforce.com/eventperformances.asp?evt=159

The recording of the show will be broadcast the week of May 29 on NPR and also on "From The Top's" website and podcast. Additional details are available on the website at: https://www.fromthetop.org/musician/antonio-nio-ajero