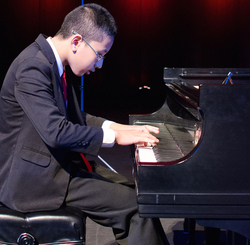 A performance by Antonio "Nio" Ajero of Nacogdoches will be featured on NPR's "From the Top" at 11 a.m. Saturday, June 3, on Red River Radio.

Hosted by acclaimed pianist Christopher O'Riley, the show will air at 11 a.m. Saturday, June 3, on Red River Radio. The episode, available for streaming and podcast at fromthetop.org, was presented by LeTourneau University and Red River Radio and taped before a live audience at LeTourneau's Belcher Center in March.

Nio is a student of Linda Parr in the Music Preparatory Division of the Stephen F. Austin State University School of Music. He is also winner of the 2017 Baylor/Waco Solo Piano Competition and a National Gold Medal from The Royal Conservatory for earning the highest score in the United States on their Level 9 Piano Exam.

A seventh-grade student at Mike Moses Middle School, Nio is the son of Dr. Mario Ajero, professor of piano at SFA, and Gina Ajero.