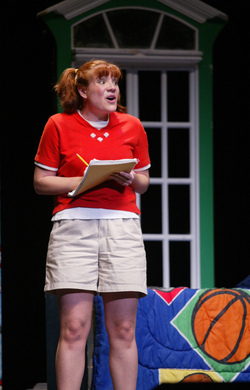 ArtsPower's musical version of Judy Blume's popular "Otherwise Known as Sheila the Great" is one of the five shows included in the 2008-2009 season of the Stephen F. Austin State University Children's Performing Arts Series. Season and single event tickets are now on sale.

Each year more than 10,000 area school children attend the daytime shows presented in W.M. Turner Auditorium on the SFA campus.

"The majority of our patrons are school groups," explained Diane J. Flynn, series director. "But we also have quite a few parents and grandparents who bring their children to our approximately one-hour shows, offered at 9:30 a.m. and 12:30 p.m."

The season will open Tuesday, Oct. 14, with ArtsPower's musical adaptation of Judy Blume's "Otherwise Known as Sheila the Great."

The target audience of second through sixth graders will relate to the main character, 10-year-old Sheila, who is afraid of everything, considers her older sister a pain and gradually discovers her inner self, said Flynn.

Based on the 1876 classic story by Italian author Carlo Collodi, the musical follows Geppetto's irresistible puppet-son as he travels from a carnival to Candyland in the belly of a whale. It is recommended for children in kindergarten through sixth grade.

Mr. Fish and Trent the Mime of "Super Scientific Circus" will return to SFA on Thursday, Feb. 5, and Friday, Feb. 6, using circus stunts and magic tricks to highlight scientific principles for kindergarteners through 12th graders.

"Because of this show's popularity, we are offering four shows this year, a 9:30 and 12:30 performance on both days," Flynn said.

The production is recommended for students in kindergarten through fourth grade.

"This traditional Mexican folktale about a mischievous prince who learns the true meaning of love and loyalty after being transformed into a rabbit will be a great way to celebrate Cinco de Mayo," Flynn said.

Tickets to any performance on the series are $6 for individuals and $5 each for groups of 20 or more. Season tickets are $24 each.

"We have already taken quite few orders, and I expect several of the shows to sell out," Flynn said. "Seats are assigned as soon as we receive payment or a purchase order, so I recommend that patrons call as soon as they know which shows they want to attend."

The Children's Performing Arts Series is offered through the SFA College of Fine Arts and is sponsored in part by Commercial Bank of Texas.