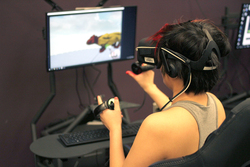 NACOGDOCHES, Texas - Within seconds, she is transported into a human cell much like the characters from the animated "Magic School Bus" series. All around her the smallest unit of life comes into focus.

No, this isn't a scene from a science fiction movie. It's a virtual reality simulation at Stephen F. Austin State University's Steen Library.

"I think this is one of the most exciting things that has happened on campus in a while that was specifically made to benefit students," said Kreg Mosier, head of library web services.

Mosier and Edward Iglesias, web services librarians, have been the driving forces behind this endeavor.

"It's a relatively unique thing in higher education to have this technology," Iglesias said. "You can have VR and 3-D printing in engineering labs or specific departments within a university, but it's rare to have it in the library where everyone can use it."

SFA is a pioneer in housing this type of virtual technology in a central environment. Mosier said making the technology available to all students was important and makes SFA stand out from other universities.

"This lab is aligned with our student success initiative. I think of it as a value-added experience," Mosier said. "We are giving students something they may not otherwise get to experience."

In this virtual-reality-based makerspace, students can immerse into dozens of different scenarios and places such as the human cell or thousands of leagues under sea - all by slipping on the HTC Vive goggles. The two virtual reality rooms allow users the ability to move around during their virtual reality simulation while the Oculus Rift experience requires users to remain seated.

"We are doing something new and trying to create a compelling experience and toolset for students," Mosier said. "The thing that makes me the proudest is the small ecosystem that has developed. A student can create something in 3-D on the computer, view it in virtual reality and then print it in 3-D, which is something I thought was science fiction as a kid."

Users can create items in programs such as Tilt Brush and Oculus Medium and then print their creations in 3-D using the lab's two 3-D printers. During a class visit and lesson, Emily Schneider, SFA senior advertising major from Dallas, did just that and was enthusiastic about her experience.

"This is an amazing experience for students especially since it's free," Schneider said. "I think it's fun for students because they get to try something that is usually not available to them."

For more information, contact Mosier at kmosier@sfasu.edu or Iglesias at igelsiase@sfasu.edu.