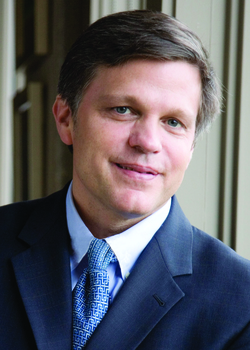 NACOGDOCHES, Texas - Douglas Brinkley, whom CNN has declared, "a man who knows more about the presidency than any human being alive," will headline the 2017 installment of the Archie McDonald Speaker Series at Stephen F. Austin State University.

The speaker series event is free and scheduled for 7:30 p.m. Monday, April 24, in the Baker Pattillo Student Center Grand Ballroom on the SFA campus. A private reception for 100 guests will be held prior to the main event. Private reception tickets can be purchased by contacting April Smith, SFA associate director of development, at (936) 468-5406.

"We are pleased to have such a prestigious presidential scholar and historian join us for our 2017 Archie McDonald Speaker Series," said Dr. Steve Bullard, SFA provost and vice president for academic affairs. "Douglas' work has allowed for an inside look into the lives of some of America's greatest leaders. His contributions are indispensable to the study of history."

Six of Brinkley's books have been selected as New York Times "Notable Books of the Year," and a number of his most recent publications have become New York Times best sellers. His most recent book, "The Nixon Tapes," published in July 2014, discusses fascinating aspects of Nixon's presidency, including the year Nixon opened relations with China, negotiated the SALT I Arms Agreement with the Soviet Union and won a landslide re-election victory.

Brinkley completed his bachelor's degree at Ohio State University and received his doctoral degree in U.S. diplomatic history from Georgetown University in 1989. He then spent a year each at the U.S. Naval Academy and Princeton University teaching history.

Brinkley has achieved notable status among presidential historians and received a number of recognitions for his work, including the Benjamin Franklin Award and the Theodore and Franklin Roosevelt Naval History Prize for two of his publications. He also was awarded the BusinessWeek Book of the Year Award and was named 2004 Humanist of the Year by the Louisiana Endowment for the Humanities. In February, Brinkley won a Grammy Award in the Large Jazz Ensemble category for producing the Ted Nash Big Band album "President Suite: Eight Variations on Freedom."

Brinkley is a contributing editor for Vanity Fair and a frequent contributor to The New York Times, The New Yorker and The Atlantic Monthly. He also is a member of the Theodore Roosevelt Association, the Franklin and Eleanor Roosevelt Institute, the Council on Foreign Relations and the Century Club. The Chicago Tribune has deemed him "America's new past master."

Brinkley lives in Austin and Houston with his wife and three children.

The Archie McDonald Speaker Series was created in 2010 by SFA's College of Liberal and Applied Arts. Dr. Brian Murphy, dean of the college, designed the event to honor and preserve the legacy of Dr. Archie McDonald as a distinguished scholar, educator and community commentator. In the tradition of McDonald's writings and oral presentations, a prominent national figure is hosted annually at SFA to discuss contemporary cultural issues.

McDonald taught history at SFA for 48 years and served as director of the East Texas Historical Association and editor of the association's journal for 37 years. He was a past president of the Texas State Historical Association, past vice chair of the Texas Historical Commission and author/editor of more than 20 books on historical topics. Along with teaching, he was a commentator on Red River Radio in Shreveport and wrote a weekly column for area newspapers. He passed away Aug. 16, 2012.

SFA's Student Government Association sponsors the speaker series, which is open to the public. Passes may be obtained at the Involvement Center on the first floor of the Baker Pattillo Student Center on the SFA campus or at the Nacogdoches Convention and Visitors Bureau, located at 200 East Main St. For more information, call (936) 468-5406.