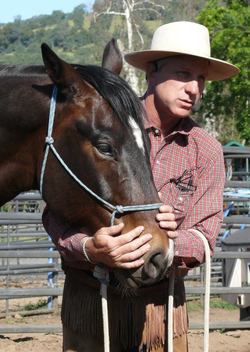 SFA School of Art and Friends of the Visual Arts will screen "Buck," the documentary about acclaimed "horse whisperer" Buck Brannaman, at 7 p.m. Friday, Feb. 3, in Cole Art Center.

NACOGDOCHES, Texas - The Stephen F. Austin State University School of Art and the Friends of the Visual Arts will present a free, one-night screening of "Buck" at 7 p.m. Friday, Feb. 3, in The Cole Art Center @ The Old Opera House in downtown Nacogdoches.

"Buck" provides an overview of the life of acclaimed "horse whisperer" Buck Brannaman, who suffered from years of abuse as a child and became a noted expert in the interactions between horses and humans. Brannaman was the lead equine consultant for the Robert Redford film "The Horse Whisperer." His training philosophy is to communicate with horses through leadership and sensitivity, not punishment.

The film runs 88 minutes and is rated PG for thematic elements, mild language and an injury.