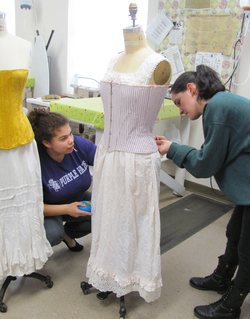 SFA theatre students, from left, Danika Pettyjohn, Forth Worth senior, and Taylor Solice, Mesquite senior, work on costumes for "Intimate Apparel," Lynn Nottage's award-winning play to be presented by the SFA School of Theatre at 7:30 nightly Feb. 28 through March 4 in W.M. Turner Auditorium on the SFA campus.

One of Nottage's best-known plays, "Intimate Apparel" was co-commissioned and produced at Baltimore's Center Stage where it premiered in 2003. It was highly acclaimed in its Off-Broadway production in 2004, starring Viola Davis.

King describes the play, which is set at the turn of the 20th Century as "a beautiful story of love and acceptance." Esther, a black seamstress, lives in a boarding house for women and sews intimate apparel for clients who range from wealthy white patrons to prostitutes. Her skills and discretion are much in demand. In its review of the play, Variety wrote: "The play offers poignant commentary on an era when the cut and color of one's dress - and of course, skin - determined whom one could and could not marry, sleep with, even talk to in public."

"Nottage poetically introduces us to a resilient yet lonely seamstress, who falls in love with a Barbadian laborer site unseen," King said. "This seamstress weaves in and out of bedrooms, sewing delicate apparel for both the rich and the impoverished. It is in those bedrooms that her dreams are both lost and found."

As the title implies, "Intimate Apparel" uses costuming as another means of communicating the complex elements of the story, King said.

"The elaborate and intricate corsets, dresses and suits in the production will be stunning and help to propel the story," he said. "Also, true to the time period, music will play an integral role in establishing mood, time period and the world of the play."

True to the 1905 time period in which the play is set, women characters wear elaborate yet restrictive corsets.

"1905 is a completely different time period than 2017," King said. "Many of the social norms, clothing, class distinctions and race relations have lessened greatly. The actors will have to learn to breathe, walk, sit and, most importantly, project while wearing corsets."

Two of the characters have distinct accents - one Barbadian and the other Romanian.

"It will be a challenge to ensure the integrity of the accent is preserved while ensuring the audience understands the actor fully," King said.

King believes that each audience member will be able to relate to a piece of each character.

King founded 7th Stage Productions in 2005 to address the lack of diverse arts in his hometown of Dallas. He served as the first chief executive director for the Black Academy of Arts and Letters in Dallas. Working with TBAAL, King worked with an impressive list of artists, including Diahann Carol, Debbi Morgan, Fantasia, Ledisi, Loretta Divine, Malik Yoba, Malcolm Jamal Warner and the late Ruby Dee.

A 2003 graduate of Morehouse College, King recently earned a master's degree in fine arts theater producing and management from Columbia University. While in New York, he worked on Broadway with Disney Theatrical Group and served as an associate producer with the Tony Award-winning Negro Ensemble Company, Miller Theatre, Harlem School of the Arts and several other Off-Broadway companies. He has worked in many facets of theater, including as a director, producer, playwright, marketing director, costume and set designer, stage manager and graphic designer.

Winner of the 2004 New York Drama Critics Circle and the Outer Critics Circle Awards, "Intimate Apparel" will be presented at 7:30 p.m. Tuesday through Saturday, Feb. 28 through March 4, in W.M. Turner Auditorium in the Griffith Fine Arts Building on the SFA campus. The play is recommended for mature audiences. A content advisory may be viewed at www.theatre.sfasu.edu.