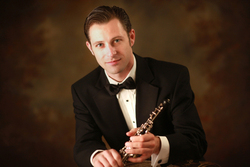 The recital is part of the SFA School of Music's Cole Performing Arts Series. Joining Hughes will be his wife, pianist Amanda Hughes, who is an active performer, accompanist and piano teacher in Tyler.

Hughes describes the program music as providing "an interesting contrast of light and darkness."

"Some works, such as the Poulenc and Dutilleux, are autobiographical as they shed light on the composer's experience," Hughes wrote in his program notes. "Poulenc composed his sonata in 1962 (one year before his death) and dedicated it to the memory of Sergei Prokofiev. It is a profound work that is disturbingly grim as it defies the common three-movement sonata conventions of beginning and ending with fast movements."

"The Dutilleaux oboe sonata dates from 1947 and begins with a very somber mood," Hughes writes, "but in contrast to the Poulenc sonata, it ends with a calm and tuneful third movement. The lively second movement evokes the sounds of drums and war through its rhythmic figures and melodic content. Both of these composers lived through the horrors of World War I and II."

Hughes explains that the Capriccio evokes the world of 19th century Italian opera with its "tuneful melodies and lush Romantic harmonies," while the Dorati piece uses a fully modern harmonic idiom most closely related to the works of Bartok and Kodaly, both of whom Dorati knew while studying at the Franz Liszt Academy in Budapest, Hungary.

Kerry Hughes joined the faculty at Stephen F. Austin State University in 2016 and is completing a doctorate at the University of Houston. He has performed on oboe and English horn with orchestras throughout Texas and has had extensive chamber music experience.

Amanda Hughes, who has given several recitals across the U.S. and Europe, is currently a doctoral candidate at the University of Houston, where she was awarded a music fellowship and accepted into the studio of legendary pianist and recording artist, Abbey Simon. She is currently professor of piano and music theory at Navarro College.

The concert is a presentation of the SFA College of Fine Arts and School of Music. Cole concert Hall is located in the Tom and Peggy Wright Music Building, 2210 Alumni Drive.