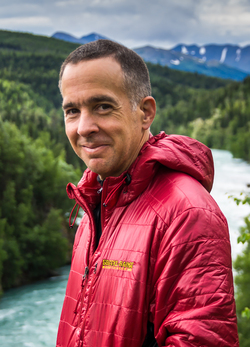 NACOGDOCHES, Texas - Another composition by Dr. Stephen Lias, professor of composition at Stephen F. Austin State University, will have its world premiere on a national stage when the Boulder Philharmonic Orchestra performs it at the John F. Kennedy Center for the Performing Arts in Washington, D.C.

"All the Songs that Nature Sings," written as a commission for the Boulder Philharmonic with a grant from the National Endowment for the Arts, will premiere during "SHIFT: A Festival of American Orchestra." The Kennedy Center and Washington Performing Arts are collaborating to present the inaugural SHIFT Festival from March 27 through April 1.

The new festival is designed to spotlight North American orchestras of all sizes. The event "celebrates the vitality, unique identity, and extraordinary artistry of orchestras by creating an immersive festival experience in the nation's capital," according to information at kennedy-center.org.

The Boulder Philharmonic will perform "All the Songs that Nature Sings" during Tuesday night's festival performance, which begins at 8 p.m. "Music and Nature" is the program's theme. The concert will also feature Jeff Midkiff's "From the Blue Ridge," Steve Heitzeg's "Ghosts of the Grasslands" and Aaron Copland's "Appalachian Spring."

In recent years, adventurer-composer Lias, who has been writing place-inspired compositions throughout his career, has written a sizable series of works about the national parks of the U.S. in conjunction with the 100th anniversary of the founding of the National Park Service in 2016. He has served as artist-in-residence at Rocky Mountain, Glacier, Denali, Glacier Bay, Bering Land Bridge and Gates of the Arctic national parks. His park-related pieces have been performed throughout the U.S. and in Sydney and Taiwan. Last year, Lias released a CD of park-inspired chamber works titled "Encounters: Music Inspired by Our National Parks."

"All the Songs that Nature Sings" was inspired by Rocky Mountain National Park, where Lias said he had the opportunity to "explore all its secret and inspiring corners, and deepen my relationship with this magical place" while serving as artist-in-residence there in 2010.

"So it was with great excitement that I accepted a commission in 2015 from the Boulder Philharmonic to write a new orchestral piece about Rocky as part of the celebration of the centennial anniversary of the National Park Service," Lias said. "The resulting piece frames melodies written during my residency in 2010 with undulating and hypnotic textures reminiscent of rippling water, wind-swept grasses and fluttering aspen leaves.

"It is my hope that the listeners will have a vicarious wilderness experience through this work," he added, "and that those who know the park well will recognize the voice of a familiar friend."

One of the principal melodies in the piece was borrowed from a previous piece Lias wrote for Rocky Mountain National Park and premiered by Dr. Gary Wurtz, director of the SFA School of Music, titled "The Timberline Sonata."

The grant the Boulder Philharmonic received for this commissioning was among the NEA's "Imagine Your Parks" grants specifically aimed at events associated with the NPS centennial.

Lias will host a composer talk prior to the Kennedy Center performance of the new piece. The performance will be accompanied by choreographed nature photography provided courtesy of Rocky Mountain National Park and synchronized by Lias.

Lias' music is regularly performed in concerts and recitals across the U.S. and abroad.

For more information about Lias and his work, visit www.stephenlias.com