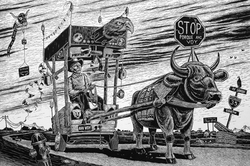 "No me Falles Baca, Nos Falta Poco en Este Viaje! (Don't Fail Me Cow, Our Journey is Coming to an End)" is among the works of Juan de Dios Mora to be featured in an exhibition showing Jan. 26 through March 9 in The Cole Art Center @ The Old Opera House in downtown Nacogdoches.

NACOGDOCHES, Texas - An exhibition of work by artist Juan de Dios Mora will show Jan. 26 through March 9 in The Cole Art Center @ The Old Opera House in downtown Nacogdoches.

The exhibition will feature Mora's finely detailed block prints - some printed with a single color and others featuring multi colors, according to John Handley, director of galleries for the Stephen F. Austin State University School of Art.

"Much of the work reveals the artist's Mexican culture combined with his experience as an immigrant and American citizen living near the border," Handley said. "Economic, social, political and cultural issues interplay in a poignant dialogue that includes tragic, humorous and absurd situations."

Born in Yahualica, Mexico, Mora and his family immigrated to the U.S. in 1998 when he was 14. He earned a Bachelor of Fine Arts with an emphasis in painting in 2009 and a Master of Fine Arts specializing in printmaking in 2011, both from the University of Texas at San Antonio. He is senior lecturer in the art department at UTSA.

Handley first met Mora when the artist was on the SFA campus giving a lecture in the print studio.

"What captured my attention when I saw his prints was the sheer beauty of his work - amazing in detail, with incredible mastery of line, depth, perspective and composition," Handley said. "There were stunning examples of block prints, some simply printed with black ink, and some multi-colored ones, too. Only after spending time admiring the technical aspects of his work did I begin to notice the content."

The artist will be present for the exhibition's closing reception from 5 to 7 p.m. Thursday, March 9.

The show is sponsored in part by the SFA Friends of the Visual Arts, the Nacogdoches Junior Forum and the Texas Commission on the Arts, which is the state affiliate for the National Endowment for the Arts. Admission is free for all art exhibitions and receptions.