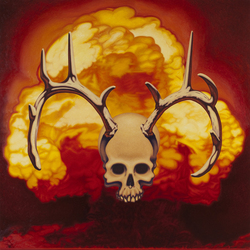 Texas National juror Benito Huerta's "Crown of Creation" 2016, Oil on Canvas, is among the artist's work to be featured an exhibition that will show along with the Texas National 2017 Competition and Exhibition April 8 through June 10 in Cole Art Center.

Texas National features an assortment of art, including photography, painting, sculpture and mixed media, according to John Handley, director of SFA galleries. This year's exhibition includes over 90 pieces of art by 81 artists from 29 states. This year's event will include entries by Sarah Jentsch, Korey Burns and Carolyn Norton, SFA art students whose work Huerta selected for the competition.

The School of Art's annual juried competition and exhibition attracts entrants from across the United States, providing artists an opportunity to have their work juried by highly regarded artists and critics, such as Huerta, Handley said.

"Texas National provides an important opportunity for students and emerging artists to have their artwork seen by an established artist of national status," Handley said. "It also provides an opportunity for our own SFA School of Art students to see what current trends are emerging in contemporary art across the United States."

Because Texas National accepts an assortment of art, "we receive plenty of surprises based on what the juror selects," Handley added.

A show of Huerta's own work can be viewed in Reavley Gallery during the same exhibition period as Texas National. Huerta received a B.F.A. from the University of Houston and his M.A. from New Mexico State University. He was co-founder, executive director and emeritus board director of "Art Lies," a Texas art journal. He is a professor at the University of Texas at Arlington where he has been director/curator of The Gallery at UTA since 1997.

His work was recently featured in one-person exhibitions at the Houston Museum of African American Culture, the Wichita Falls Museum of Art and the Amon Carter Museum of American Art. Other recent one-person exhibitions took place at the Glassell Gallery, Shaw Center for the Arts, Louisiana State University, Baton Rouge, Louisiana, at the National Museum of Mexican Art in Chicago and at the Ellen Noel Art Museum in Odessa. Huerta is a past recipient of the Dallas Center for Contemporary Art's Legend of the Year Award and Exhibition. His work is in several museum and corporate collections throughout the United States. For additional information about the artist, visit http://flyingchalupaproductions.com.

Huerta will give an artist/juror talk at 5 p.m. Saturday, April 8, at the art center, followed by the announcement of this year's Texas National winners during the exhibitions' opening reception, which begins at 6 p.m.

The exhibitions and reception are sponsored in part by the SFA Friends of the Visual Arts, Nacogdoches Junior Forum, Texas Commission on the Arts and R&K Distributors, Inc.