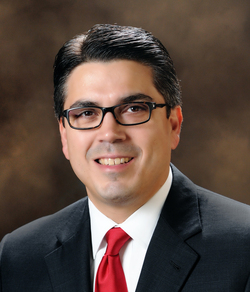 Serving his second legislative term representing the Texas House of Representatives District 9, Paddie, a native of Center, served as the vice chairman of the House Energy Resources Committee as well as a member of the Transportation and House Administration Committees.

He also served on the Transportation Subcommittee on Long-term Transportation Planning and Infrastructure, and was the House of Representatives appointee to the Texas Bioenergy Policy Counsel.

The Texas Association of Business named Paddie a Champion of Free Enterprise and the Combined Law Enforcement Agencies of Texas called Paddie one of the Best in the House.

While in Houston, he married his high school sweetheart, Brooke Hanszen. The couple returned to East Texas and settled in Marshall, where Paddie worked as the general manager of KMHT radio. He was elected to the Marshall City Commission in 2008 and served as mayor, where he became known for his leadership and values.

The Paddies have two sons, Christopher and Noah.

Master's and doctoral degree candidates will graduate with their respective colleges, and Paddie will provide the commencement address at both ceremonies.