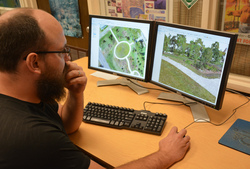 The subtle whir of an unmanned aircraft system, commonly known as a drone, may not be the first thing one expects to hear when visiting a forested tract of land managed by Stephen F. Austin State University's Arthur Temple College of Forestry and Agriculture, but the use of such technology in natural resource management is becoming more commonplace.

"Global positioning systems, aerial measurements and drones are the wave of the future," said Dr. Daniel Unger, professor of remote sensing of natural resources in SFA's Arthur Temple College of Forestry and Agriculture. "The key is its high spatial resolution, its detail, and you can fly it whenever you want the imagery taken."

Unger said that in 2001, he and other faculty members from SFA's spatial science program initiated a four-county forest-inventory project using imagery from satellites that pass overhead every 16 days. However, due to cloud cover, this seemingly simple process required two years to obtain usable imagery.

Thanks to the availability of unmanned aircraft systems and other advancements in spatial technology, faculty members and students no longer have to rely on inaccessible satellites and combat limiting factors such as cloud cover.

"The key with the new technology is we control the imagery when we want it," he said. "We can get it when we need it, as opposed to the old-school technology where we had to rely on other people to collect it."

The quality of the imagery collected also has substantially improved, providing researchers and natural resource professionals with high-resolution images and precise GPS coordinates that can be used to make management decisions.

Because of the growing use of advanced technology in natural resource management and other related disciplines, the college instituted a new degree program in 2008 dedicated to geographic information systems, remote sensing and GPS. The university's Bachelor of Science in spatial science provides students with an intensive curriculum in the emphasis areas of natural resources or land surveying. Additionally, faculty members consistently integrate aspects of the spatial science program into the core curriculum of the college's forestry and environmental science programs.

Dr. David Kulhavy, Laurence C. Walker Distinguished Professor of forest entomology at SFA, said students enrolled in the college's capstone forestry course recently discovered evidence of Ips bark beetles in a forested tract managed by the college. Their discovery is due in large part to the ability to collect 400 acres of high-resolution imagery in roughly one hour and analyze it in the lab.

"Within about 10 minutes from collecting the imagery outside we were in the lab looking at the images, and they were pretty much convinced to buy an unmanned aircraft system to use for this assessment," said Unger. "The imagery was so good, you could zoom in and see galls on the leaves in the canopy."

Galls, Kulhavy explained, are irregular growths of plant tissue caused by insects or mites and can be used as indicators of tree health.

"The field has moved from being a labor-intensive to a technologically-intensive career," said Dr. Yanli Zhang, associate professor of spatial science at SFA.

Although this technology continues to rapidly advance and be incorporated into the college's programs, spatial science faculty members emphasize the importance of in-field experience. They don't foresee technology replacing traditional forestry techniques; they see it as yet another useful tool for forest management.

To learn more about SFA's spatial science program, as well as the Journal of Geospatial Applications in Natural Resources, visit atcofa.sfasu.edu.