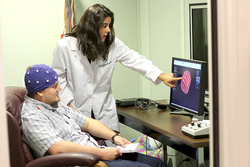 During the demonstration, a monitor displays a digital version of T.J.'s brain with reds, greens and yellows illustrating the electrical signals, while T.J.'s wife and fellow graduate student, Rebecca Recio-Swift, administers a study to track T.J.'s attention.

"Working in the lab is probably one of the best experiences I will ever have," Rebecca said. "I think we all share a passion for what we do here, and I think that makes it even better."

SFA's Human Neuroscience Lab is tucked away on the first floor of the Human Services Building, Room 105, on the university campus, where Dr. Luis Aguerrevere serves as the lab's director.

"The lab gives a practical, hands-on understanding of brain-based research. For example, in classes like human neuroscience, students visit the lab to see their own brainwaves and areas of the brain. They are not only seeing this information on a PowerPoint, but they also are becoming part of the research," Aguerrevere said.

The lab has an open-house policy, meaning students and faculty members are welcome to use the facility and equipment for research. Lab equipment includes a Tobii eye-tracking system, which allows researchers to measure eye movement focusing on fixation and regression; quantitative electroencephalography equipment, which measures electrical brainwaves by assigning numerical components to brain activity; biofeedback technology, which analyzes physical attributes such as muscle contractions, temperature and breathing patterns; and neuropsychological tests for attention, executive function, language, visual perception and memory.

Graduate and undergraduate students use the lab on a daily basis conducting research and working on their assignments, including their theses and doctoral dissertations.

"We have a really big team effort here," Rebecca said. "If an undergraduate has an idea, we encourage it, and we try to provide the resources and help that we can."