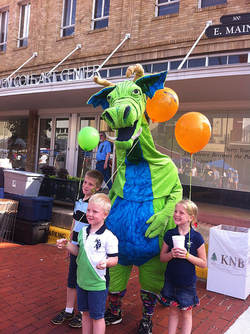 Theatre students will appear in costumes portraying popular characters from fairy tales and children's stories. Children (and adults) will have the opportunity to talk with the students and take photos with them, according to Angela Bacarisse, professor of design and arts management at SFA. The School of Theatre's trademark dragon character, Schlaftnicht, from the children's show "Trudi and the Minstrel," performed the summer of 2005, will make his annual Blueberry Festival appearance.

"We have a lot of fun just dressing up and seeing how excited the kids are when they see us and get to talk to their favorite characters," Bacarisse said.

Students will be promoting the upcoming SFA SummerStage Festival, which kicks off Friday, June 24, and runs through July 16. The family friendly festival will feature the children's favorite "A Year With Frog and Toad" by Robert and Willie Reale. Also in the festival lineup is something for the adults, "Picasso at the Lapin Agile," a witty comedy by actor, screenwriter and stand-up comic Steve Martin.

Bacarisse, the director of the smash hit "Spamalot" and the summer kids' favorites "The Emperor's New Clothes: The Musical" and "How I Became a Pirate," directs "A Year With Frog and Toad," which is based on the books by Arnold Lobel. The musical follows the story of the beloved suburban amphibians who leap to tuneful life with irresistibly upbeat Frog lifting the spirits of his worrywart neighbor Toad.

The students perform at the Blueberry Festival each year to "let the community know that the SFA School of Theatre offers good quality family entertainment at affordable prices to our neighbors in Nacogdoches," according to Bacarisse. Discount coupons for the SummerStage Festival will be distributed that day.

The costumed characters can be seen in front of The Cole Art Center @ The Old Opera House at 329 E. Main St. Theatre students will be selling crafts and doing face painting as a fundraiser.

For performance times and ticketing information for the SummerStage Festival, visit theatre.sfasu.edu or call (936) 468-6407 or (888) 240-ARTS. All performances are in W.M. Turner Auditorium in the Griffith Fine Arts Building on the SFA campus.