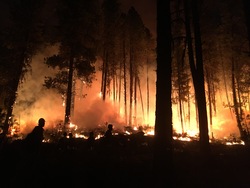 Hickman and Peterson worked to control a total of five fires during their time on the crew, the largest covering 84,000 acres. Pictured, crewmembers monitor an area intentionally ignited within a control line to consume vegetation and slow the progress of an advancing wildland fire.

"This crew is special because it's a training crew," Peterson said. "By the end of the season, you're supposed to be hotshot ready, so every two weeks you're given an evaluation by your superior."

Peterson explained that the Bureau of Land Management and U.S. Forest Service Interagency Hotshot Crews are an elite assemblage of wildland firefighters with extensive training, knowledge and physical endurance. These crews are the first responders to high-priority, complex fires that occur across the nation.

During the first two weeks of the program, crewmembers are immersed in intensive training that includes wilderness first-aid and sawyer certifications, as well as Incident Qualification Card certification. The Incident Qualification Card, commonly referred to as a Red Card, qualifies holders to conduct prescribed burns and fight wildland fires with federal agencies or on federal land. In addition to technical training, crewmembers also participated in rigorous physical training.

After the two-week training period, Peterson said the initial pool of 25 candidates was reduced to 16. Immediately following training, the crew was called into action.

"For our first fire, we flew in on a little airstrip near a native village. Usually you then take a helicopter to the fire, but this fire was about to burn over the airstrip," Hickman said. "We could see the entire smoke column while flying into the airstrip."

Hickman added their superior did not expect the crew's first fire to be so challenging.

Although this was their first time serving on a wildland fire crew, Hickman and Peterson have experience conducting prescribed burns. Prior to pursing his Bachelor of Science at SFA, Hickman also received certifications in firefighting through a junior college's fire science program and is employed by TimberPro Forest Service to conduct prescribed burns for private landowners.

Although they are educated in fire ecology and management, both men agreed serving on the wildland fire crew was a completely new and challenging experience.

"There's a point in the beginning of the season where your whole body hurts and you're working 16 hours a day, every day," Peterson said. "Your body is not used to working like that. But then in the middle of the season, something happens, and you and the crew just begin to enjoy the misery."

In addition to the physical hardships of the job, crewmembers also must be mentally engaged to understand and interpret how fire behaves in ecosystems they may be unaccustomed to.

"Their fuels are so different," Hickman said, referring to the region's vegetation. "It's all peat moss, so it will burn underneath when you think it is all out. You won't always see flames where there is fire, but it will smolder and potentially reignite."

Hickman and Peterson managed five separate fires during their service, the largest being an 84,000-acre fire in Idaho their crew and others were called to contain.

As fire season ended and classes resumed, both students said they were already contemplating which fire crews to join next summer. 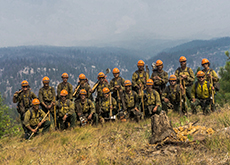 This summer, two Stephen F. Austin State University students served three months on the Alaska Fire Service's North Star Fire Crew. The fire crew is intended to provide the Alaska Fire Service with additional quick-response crews during fire season, while also creating an experienced pool of potential recruits for more advanced firefighting units. Both students are pursuing a Bachelor of Science in Forestry with an emphasis in fire management in SFA's Arthur Temple College of Forestry and Agriculture. Pictured with their crewmembers are Cade Hickman, bottom row, third from left, and David Peterson, top row, fifth from left.