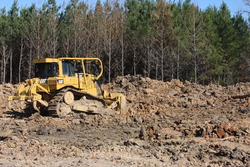 Researchers at Stephen F. Austin State University's Arthur Temple College of Forestry and Agriculture have partnered with the Office of Surface Mining Reclamation and Enforcement to improve coal mine reclamation by reforestation in the Western Gulf Coast region of the U.S. by comparing different reclamation approaches used in Texas and the Eastern U.S. Pictured, heavy equipment replaces soil on an excavated area simulating a commonly used process in mine reclamation known as the pan-scraper technique.

Researchers at Stephen F. Austin State University's Arthur Temple College of Forestry and Agriculture are working with the Office of Surface Mining Reclamation and Enforcement to augment the science and success of mine reclamation in the Western Gulf Coast region of the U.S.

According to the U.S. Energy Information Administration, Texas was the country's sixth largest coal producer in 2013, generating more than 42,000 tons of lignite coal. Surface mining, in which heavy machinery is used to remove layers of earth to access the resource, is the primary technique used in the state.

While the excavated layers of a functioning mine may stand in sharp contrast to the landscape prior to operation, the Surface Mining and Reclamation Act of 1977 mandates that mined land be reclaimed and restored to its original use or to a use of higher value. In many areas across the Eastern U.S., as well as in Texas, this translates to reforestation.

Stovall explained that prior to the Surface Mining and Reclamation Act there were major issues with land stabilization, especially in the Appalachian Mountains where improperly stabilized slopes resulted in landslides. Though the passage of the 1977 act remediated this issue, it also produced unintended consequences.

"They started heavily compacting everything when they put the soil back, and that's not good for tree growth," he said. "So there are millions of acres in the Appalachians that are essentially low-productivity grasslands in a region that once was dominated by valuable, mesophytic hardwood forests."

Years of research conducted by a number of universities in the Appalachian region, including Virginia Tech and the University of Kentucky, resulted in the development of the forestry reclamation approach, a restoration process comprised of five key steps to help ensure successful forest re-establishment.

Now, the Office of Surface Mining Reclamation and Enforcement is working with SFA to adapt this process to best suit the conditions found in the Western Gulf Coast.

To do so, Cassidy Comer, a doctoral student in the Arthur Temple College of Forestry and Agriculture, led the installation of a two-acre study site in East Texas comparing the success of forest health on test plots using traditional land reclamation techniques versus those using forestry reclamation approach techniques. Stovall explained that in order to avoid the operational constraints of conducting research on working mine land, the team excavated test plots on unmined land to simulate a traditional mining operation.

Comer, a native of Gillette, Wyoming, is no stranger to coal mining.

"The town I'm from is called the energy capital of the world," she said. "There are 13 coal mines in my small county."

On three of the excavated test plots, heavy machinery was used to replace the soil in thin layers, simulating the pan-scraper technique that is currently used in Texas. Stovall and Comer explained that although this process effectively replaces soil, the repeated trips made by the heavy machinery compacts the soil so much that the area must then be ripped and plowed using agricultural equipment in order to replant trees.

"You have your large rock truck and it backs up and dumps a big pile out and it goes and gets more and dumps another pile adjacent to and overlapping the first pile," said Stovall. " It leaves very rough, microtopography."

These two treatments will be compared to a control plot, which was cleared of vegetation and replanted without any excavation.

In addition to monitoring tree growth rates for each treatment, Comer will monitor soil chemistry and hydrology to determine which reclamation method allows for the best infiltration of water.

Stovall said Comer's research is one step toward adapting the forestry reclamation approach for the entire mid-continent region of the U.S.

For more information regarding this or other research at SFA's Arthur Temple College of Forestry and Agriculture, call (936) 468-3301, or visit atcofa.sfasu.edu.