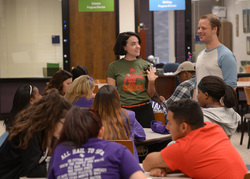 Leaders of the 2016 Generation Jacks Summer Leadership Academy speak with first-generation students Wednesday who are participating in the weeklong crash course on all things college. Data shows both overall retention rates and GPAs of participating first-generation students have improved since the GenJacks program was created by Stephen F. Austin State University faculty members in 2014.

Fresh out of a training module on Microsoft's OneDrive file sharing application - preceded by an hourlong session on dealing with stress - students of the Generation Jacks Summer Leadership Academy continued to buzz with excitement.

"I love it," said Ashlynn Beard of Arlington, incoming SFA freshman and GenJack academy participant. "The group already feels like a family. I feel like I really can open up to a lot of people in here because we have all gone through the same or similar things with our parents. Probably all of our parents struggled because they didn't go to college and things were probably a lot harder for them."

Generation Jacks began in fall 2014 as the brainchild of Dr. Marc Guidry, associate dean of the College of Liberal and Applied Arts, and Dr. Michael Walker, assistant dean of Student Affairs Support Services and associate professor of psychology.

"I got an email from SFA about GenJacks, my mom and I talked about all the perks and decided this is what I wanted to do," said Denis Castillo of Grand Prairie, an incoming SFA freshman and academy participant. "What stood out to me about the program was the fact that all four years of college, we are going to be with the same group of people until we graduate. If we fall behind, someone here will be able to help."

The aim of GenJacks is to provide an academic and social support system for first-generation students who often don't have the benefit of a close family member with college experience.

"There has never been a program like GenJacks at SFA before, so we are charting new territory, creating higher expectations for our first-generation students, and breaking through barriers to help them become both scholars and servant-leaders at SFA," Guidry said. "The difference between when we started the program three years ago and now is like night and day. We have never done a weeklong summer leadership academy with our students until now. We believe this new, concentrated orientation to SFA is going to boost our students and enable them to go even higher."

Begun on Sunday, the academy is a crash course on all things college. GenJacks wake up at 7 a.m. each day and attend a consortium of sessions, modules and student-led reflections on the day's events. The sessions teach them everything from understanding financial aid to time management.

"The rigor is intentional," said Chelsea Heidbrink, SFA coordinator of student success. "It isn't to bog them down or overwhelm them, but really just to give them as many tools, resources and information as we can to ensure they don't have any doubts about their abilities or about choosing to spend their future here at SFA."

"This highly integrated approach to student engagement, both academically, professionally and socially, will continue to demonstrate success for our students," Walker said. "It will embody the SFA Way and provide those transformative experiences that will allow our GenJacks graduates to succeed well beyond our campus."

GenJacks participants and leaders raved about the academy and the bonds already forged in a few days' time.

"I am most excited to see them transform themselves in just a week," Heidbrink said. "First-generation students are incredible students. I was a first-generation student, as well, and so it is personal for me, too. FG students are resilient and determined and for me to see that come to fruition as it relates to college is just a really amazing experience - for them and for me."

According to data collected and kept by Guidry and Walker, retention rates have improved for first-generation students participating in GenJacks. GenJacks, as a whole, also have a higher GPA than their first-generation peers who are not in the program.