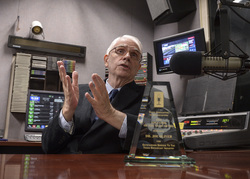 Dr. William "Joe" Oliver, retired SFA professor of communication, received the 2016 Texas Association of Broadcasters' Educator of the Year Award. During his more than 30 years on the SFA faculty, Oliver was instrumental in designing the university's radio station KSAU-FM.

"Because of my extensive background in commercial broadcasting, from the beginning I saw myself as someone to bridge the gap between educators and the broadcast industry, and promote mutual respect and understanding," Oliver said. "I take this award as validation of some success in my efforts. It came as a complete surprise to me and is a major highlight of my career."

Oliver's broadcasting career began at age 16 when he was hired by his hometown radio and television station WOWL in Florence, Alabama. After pursuing broadcasting in higher education, he received his doctoral degree in 1977 - one year after joining the SFA faculty.

His teaching centered on radio/television writing and media management and, after beginning at SFA, he was responsible for designing a fully professional university radio station that would be managed and operated entirely by students.

"After the radio/TV academic program was approved in the 1970s, I was brought in and allowed to establish bonds with professional organizations and design KSAU along the lines of a commercial broadcast station model," Oliver said. "We used it to train students for electronic media, and also used the master's program, which I directed, to help prepare our graduates for careers in professional broadcasting and education.

"SFA graduates now serve in broadcast positions and in college teaching in Texas and beyond. My award clearly reflects the success of the professional emphasis of the SFA program and its regard by both Texas broadcasters and educators."

"Upon my coming to SFA in 1992, Dr. Oliver insisted I go to my first TAB convention to meet broadcasters and expand my knowledge of the industry to take back to the classroom," Williford said. "He was very passionate about bringing the broadcast industry to his students."

Oliver retired from SFA in 2007. He and his wife, Gloria, remain in Nacogdoches.