Story by Rachel Clark and Photography by Hardy Meredith
•
February 13, 2016 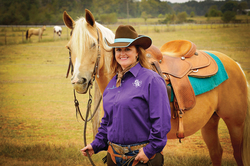 Athletes often spend years training to perfect their skills and preparing their bodies to compete at the highest level. And this SFA athlete's training was no different, except she only had five months to prepare for one of the biggest competitions of her life, and she had two additional legs to get ready.

Her registered name is Missbehavenhollywood, but to those at the SFA Equine Center, the four-legged phenomenon is simply known as Holly.

The Colorado-raised mare was acquired by SFA just 10 months ago from former owner Nancy Batzloff, who decided to step away from the horse business, but not before she found the perfect home for the 10-year-old palomino. Luckily, she was directed to SFA's Walter C. Todd Agricultural Center and Equine Center supervisor and adjunct faculty member, Michaelle Blake Coker.

Holly, who is valued at $25,000, was registered to SFA's equine donation program in February. The Palomino Horse Breeders of America World Championships was scheduled for July, and Coker hoped to showcase Holly's athletic abilities in that arena. So, she wasted no time getting to work.

It did not take long for the center's supervisor to realize just how special the newest addition was to the barn. "Holly is one of the hardest-stopping, fastest-spinning horses I have ever had the privilege to ride, and she definitely knows the difference between the practice pen and the show arena," Coker said.

The dynamic duo worked meticulously and qualified for the world show in Tunica, Mississippi.

Earning the right to exhibit at the World Championships was a lifetime achievement for both ladies. The team headed east to compete in two classes-open senior reining and open ranch riding. The day of the show, the two entered the arena proudly displaying their SFA purple pride.

"I was experiencing a whole new stress level when we competed," Coker admitted. "Yet, Holly knew what to do, and she did it well. I was extremely proud of her runs."

During the awards presentation, which was held on horseback in the arena in front of spectators, the announcer worked his way up the placings list. As Coker waited patiently, she began to sense victory.

Holly received reserve world champion honors in the open senior reining class and tied for top-10 honors in open ranch riding. The duo triumphed, securing a neck ribbon for Holly and distinguished ribbon for Coker, a plaque, a jacket and memories to last a lifetime.

Coker said the trip to Mississippi was quite an experience, but admitted the recognition at the national level with an SFA athlete was worth the 13-hour haul.

"This achievement brings our university to the forefront of the collegiate equine world. Being able to take on this project, work day in and day out, and then secure reserve world champion honors is validation that our equine program can be great," Coker said.

With this title, SFA now claims an honor many other university equine programs can't-a reserve world champion that was owned by the university at the time of exhibition.

"The improvement in SFA's equine program in the past few years is amazing," Batzloff said. "I would love to see this program continue to grow and prosper, and maybe even incorporate a breeding program that could utilize Holly."

The golden goddess, who has been jokingly nicknamed "sheep dog" due to her flowy forelock-the part of the horse's mane that extends from the top of the head, between the ears, onto the face-has certainly earned her place of honor at SFA.

Currently, she is enjoying a well-deserved rest but will again assist the program at the beginning of the year by being exhibited or bred.

The donation program enrollment period is approximately three years. In February 2018, Coker and SFA's Department of Agriculture will determine Holly's educational value, as well as examine her continued significance to the equine program.

As far as Coker is concerned, "Holly looks perfect in purple and will have a forever home at SFA as a forever Ladyjack." 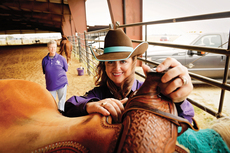