Concerto winners to perform with Orchestra of the Pines 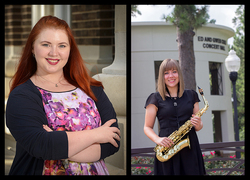 The Orchestra of the Pines at Stephen F. Austin State University will spotlight this year's concerto winners, Kelsey Quinn (left) and Claire Salli (right), in a concert at 7:30 p.m. Monday, Oct. 3, in Cole Concert Hall on the SFA campus.

NACOGDOCHES, Texas - The Orchestra of the Pines at Stephen F. Austin State University will spotlight this year's concerto winners in a concert at 7:30 p.m. Monday, Oct. 3, in Cole Concert Hall on the SFA campus.

Each work in the program, which is titled "A Musical Homage," pays homage to another work, according to Dr. Gene H. Moon, director of orchestras at SFA. The program opens with "Le Tombeau de Couperin," a work by Maurice Ravel, who pays homage to the Baroque master, François Couperin, Moon said.

"Written originally as a piano suite, Ravel conveys the subtle nuance of French Baroque music through his work, well-crafted for chamber orchestra two years after the completion of the piano suite," Moon explained.

The orchestra will present its first concerto winner, Claire Salli, a senior music education major from Arlington, who joins the orchestra in performing the first two movements of Paul Creston's Concerto for saxophone and orchestra.

"While being an American composer, Creston attributes his compositional influences to composers of the Baroque era - Bach and Scarlatti, two composers who lived in the same time as Couperin, as well as Debussy and Ravel, the masters of Impressionistic music," Moon said.

Salli has been a member of SFA's Wind Ensemble, Wind Symphony and Lumberjack Marching Band. Last year, she was the tenor saxophonist in the Zephyr saxophone quartet, which advanced as semi-finalists in the 2016 North American Saxophone Alliance quartet competition. Salli has taught private lessons, marching band and music sectionals in Denton, Nacogdoches and the Houston area. She has been a camp counselor for the SFA summer band camps as well as a unit counselor at the Blue Lake Fine Arts Camp. In 2014, Salli was a conductor for the Blue Stars Drum and Bugle Corps. She plans to pursue a master's degree in saxophone performance after she graduates this spring.

The second half of the concert features works by Czech composer Antonín Dvorák. Graduate student Kelsey Quinn of San Antonio, the second concerto winner, will join the orchestra in performing "Song to the Moon" from Dvorák's most famous opera, "Rusalka."

"One could perhaps interpret Dvorák's opera as a clairvoyant homage, inspiring the story of a famous Disney movie," Moon said. "The orchestra concludes the evening with Dvorák's mighty Symphony No. 8 in G major, a monumental work in its own right."