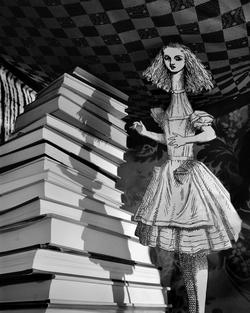 "Curiouser and Curiouser" is among the works by Texas National juror and acclaimed photographer Abelardo Morell that will be featured in the artist's exhibition running April 9 through June 11 in Cole Art Center in conjunction with the SFA School of Art's annual juried competition and exhibition.

Texas National features an assortment of art, including photography, painting, sculpture and mixed media, according to John Handley, director of SFA galleries. This year's exhibition includes 93 pieces of art by 98 different artists from 29 states.

The School of Art's annual juried competition and exhibition attracts entrants from across the United States, providing artists an opportunity to have their work juried by highly acclaimed artists and critics, such as Morell, Handley said.

"Each year for our Texas National Competition and Exhibition, we seek to engage a well-respected artist, historian and critic to act as the juror for this national exhibition," Handley said. "Abelardo Morell has covered a broad spectrum of subjects through his photographic lens. His subjects include childhood, money, still life and book illustration. He is also known for his unique experimentation and reinvention using the camera obscura where he transforms a room into a picture of the outside world."

An exhibition of Morell's own work will open simultaneously April 9 in Reavley Gallery at The Cole Art Center. Born in Havana, Cuba, in 1948, Morell immigrated to the United States with his parents in 1962. He received his undergraduate degree in 1977 from Bowdoin College and an MFA from The Yale University School of Art in 1981. In 1997, he received an honorary degree from Bowdoin College.

Morell's work has been collected and shown in many galleries, institutions and museums, including the Museum of Modern Art, The Whitney Museum of American Art, the Metropolitan Art Museum in New York, The Chicago Art Institute, The San Francisco Museum of Modern Art, The Houston Museum of Art, The Boston Museum of Fine Art, The Victoria & Albert Museum and more than 70 other museums in the United States and abroad. Among his publications is a photographic illustration of "Alice's Adventures in Wonderland (1998) by Dutton's Children's Books and "A Camera in a Room (1995) by Smithsonian Press.

Morell will give an artist's talk at 5 p.m. Saturday, April 9, at the art center, followed by the announcement of this year's Texas National winners during the exhibitions' opening reception, which begins at 6 p.m.

The exhibitions and reception are sponsored in part by the SFA Friends of the Visual Arts, Nacogdoches Junior Forum and Texas Commission on the Arts, and corporate sponsors Hampton Inn and R&K Distributors, Inc.

Additionally, the School of Art and Friends of the Visual Arts will present a free, one-night screening of the documentary "Shadow of the House," an intimate portrait of Morell's life and work, at 7 p.m. Friday, April 1, in Cole Art Center. The film, directed by Allie Humenuk, skips across time and space from Morell's early childhood escape from Castro's regime to his status as a world-renowned photographer. It explores his daily working life as an artist and his eventual return to Cuba after 40 years of living in exile, according to imdb.com.